Steel Panther consisting of frontman Michael Starr, guitarist Satchel, bassist Lexxi Foxx and drummer Stix Zadinia will be playing their third paid live stream concert since the Covid pandemic wrecked havoc around the world in or about mid-March 2020. 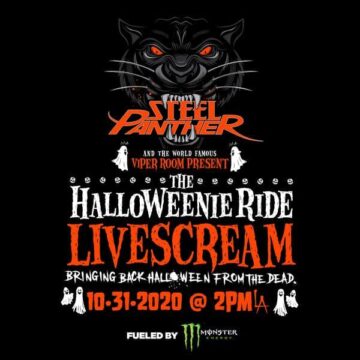 The band has filmed a series of all new sketch comedy pieces that will be played throughout the show giving the virtual experience more depth and laughs. The band will again be interacting with fans around the globe via a live chat.

Tickets include access to the Rockbuster Video archive where you can watch the past live streams and rewatch this event until Nov 14th. Rockin Like Dokken and Balls Out level Fanthers already have free access to the stream.

You can grab the show shirt and tickets to new VIP Meet and Greets below or you can bundle the ticket with shirts and the new VIP and save up to 15% here.”

Sleaze Roxx stated the following in its review of Steel Panther’s last live stream concert dubbed Rockdown In The Lockdown held back on August 16, 2020:

“The changes from Steel Panther‘s Concert To Save The World to Rockdown In The Lockdown were noticeable from the start. While Steel Panther‘s first live stream was a bit cloudy looking, this time around the colours were crisp and you can easily tell from the screen shots that I took that I included in my two concert reviews. Once again, Steel Panther had a little intro filmed. The first time around, the band members arrived to their live stream venue in full hazmat suits, which was obviously very fitting for the occasion considering the worldwide Covid-19 pandemic. This time around, the band members came up with some sappy video scenes of them together with the writing on the screen that reminded me of a ’60s or ’70s sitcom.

Perhaps the most obvious change was the setlist. Despite playing 14 songs during their first live stream and 13 this time around, Steel Panther ended up playing ten different songs during their Rockdown In The Lockdown live stream. It would probably be hard for Steel Panther not to play songs such as “Community Property,” “Death To All But Metal” and “Gloryhole” so it was no surprise that those three tracks were played at both of the band’s live streams. It was a real treat to hear songs such as the opener “Pussywhipped” and “The Shocker” (one of my personal Steel Panther favs) both of which I believe frontman Michael Starr advised had not been played live in five years. It was also fun hearing “The Burden of Being Wonderful” which is a good track for which the band shot a video for but I’ve always felt was the wrong choice for a single from an album (Balls Out) filled with any way better tracks. Overall, Steel Panther ended up playing five songs from their debut album Feel The Steel (2009), three from Balls Out (2011), three from All You Can Eat (2014), one from Lower The Bar (2017) and one from Heavy Metal Rules (2019).”