Steel Panther consisting of frontman Michael Starr, guitarist Satchel, bassist Lexxi Foxx and drummer Stix Zadinia are getting back in the touring swing of things with two live drive-in shows in the state of Pennsylvania in the USA scheduled for September 11 and 12, 2020. 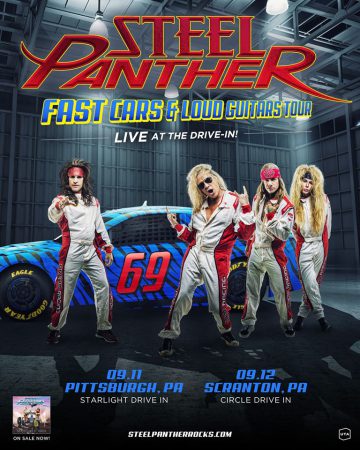 Since the Covid-19 pandemic shut down pretty much the entire world, Steel Panther have only played one live streamed concert dubbed the Concert To Save The World 0n June 7, 2020. They are scheduled to play one more live streamed show dubbed Rockdown In The Lockdown on August 16, 2020.

“New dates!! Announcing the Fast Cars & Loud Guitars Live at the Drive-In!! In order to keep you socially and sexually distant, we’ll be performing live on stage, broadcasting the performance on the movie screen with the audio available via an outdoor PA system as well as in everyone’s car!! Tickets are on sale now at steelpantherrocks.com!!

* Unfortunately, the local government has informed us that it is totally ILLEGAL to attend this concert naked. They blamed COVID; so please STILL wear a mask when you’re around strangers!”

“I can see it now. Steel Panther? They are nothing more than a “parody” band! Well, Steel Panther just happen to have released some of the greatest albums of the last two decades and one of those records just happens to have been put out in the last decade. To all the naysayers who can’t get over the silly lyrics, I would say “get over it” and listen to the songs as a whole. Balls Out has some of the catchiest and most fun songs that you’ll ever hear with some killer guitar riffs and solos to boot that would make Eddie Van Halen proud. Steel Panther have actually been very busy during this past decade releasing four studio albums, one live DVD and one live acoustic record. Balls Out is definitely the cream of the crop in terms of those four studio albums with the remainder consisting of All You Can Eat (2014), Lower The Bar (2017) and Heavy Metal Rules (2019). Tracks like “17 Girls In A Row”, “Just Like Tiger Woods” and “Tomorrow Night” from Balls Out have been staples in Steel Panther‘s live set for almost a decade with good reason. Throw in that the band still plays many of the other songs live more than eight years later (such as “Gold Digging Whore”, “Let Me Cum In” and “Weenie Ride”) and Balls Out can only be viewed as a classic album and simply the best one of this last decade.”