Steel Panther drummer Stix Zadinia was recently interviewed by Music Life Magazine and spoke that not everyone has been fun and accommodating to the band. 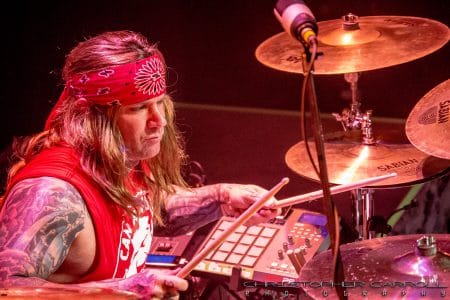 Zadinia stated: “Tommy Lee and Nikki Sixx did not like it when we went on tour with them in 2011. And that was the only time that we really felt unwelcome. The thing with those guys is I think they thought we were actually making fun of them directly. And I just gotta chalk that up to their egos being too big, because nothing that we do has anything to do with them directly. But we ended up doing the tour and it went off great and everything was totally fine… Leppard was fully supportive of it. They were amazing dudes and I am not kidding you that on the first day of the tour they knew every single one of our names. And when you’re Def Leppard you don’t have to do that. It’s just a testament to the kind of dudes those guys are, all of them. They and their crew were very, very generous. And I think we’re very accepted now. I mean, Judas Priest took us on tour with them and now we’re out with Stone Sour, which is a heavy band that is taken pretty seriously. We have worked to become sort of a rock and roll staple. Corey is a huge fan and all those guys in Stone Sour are super cool. If a dude like Corey Taylor, who is in Slipknot and Stone Sour can appreciate what Steel Panther does, then I think even the most hardcore metal fan should at least give it a shot. We may not be your cup of tea, but you can’t just write us off before you’ve given us a fair shake.”

In terms of getting accepted as more than just a parody band, Zadinia stated (with slight edits): “We have been hammering away so hard that I think we have broken down most of the people who were initially on our case. In the beginning there were so many people who were saying, ‘you can’t do heavy metal and smile at the same time. It’s not fucking cool.’ But there were also a lot of people who supported what we were doing. But my thinking is that you don’t have to like it and I understand – not everybody likes everything and I get that wholeheartedly. But you cannot say that the band sucks because we just fucking don’t. After all these years, it’s kind of funny because we like to have a good time and so do the fans, and if you hate on us, then you just come off as kind of douchy now. If we didn’t play our instruments well, if the show was really mediocre and if the songs are crappy, it wouldn’t have any fucking legs. But because we’re all actual good players and we represent what rock and roll is all about – entertainment and an escape – you listen to it, or come to the shows and it takes you away from your regular shit. There’s metal music that makes you angry and escape and there’s metal music that makes you want to have sex and escape that way. Whatever it is for you, that’s pretty much the purpose of rock and roll.”

You can read the rest of the interview with Zadinia at Music Life Magazine.