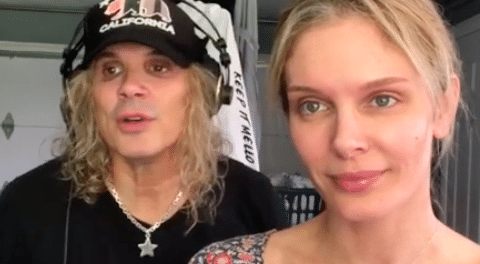 While some may be surprised that Steel Panther frontman Michael Starr is actually a married man and has children given the glam metal band members’ penchant for sexually charged lyrics and commentary at their concerts, Starr, whose real name is Ralph Saenz is married to Jocelyn Saenz who appear to have three children together. The couple recently released a video of themselves singing a duet of the song “Shallow.” 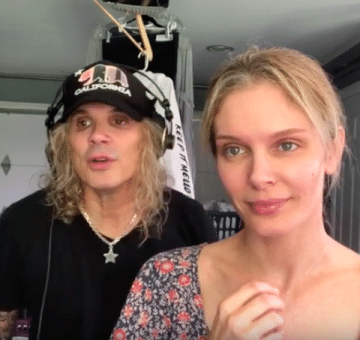 Apparently the husband is no longer a secret.”

Wikipedia states the following about Ralph Saenz (with slight edits):

“Ralph Michael Saenz (born May 17, 1965), better known by the stage name Michael Starr, is an American singer, songwriter, and musician. He is best known as the lead singer of the comedic glam metal band Steel Panther.

Ralph Michael Saenz was born on May 17, 1965 in Chicago, Illinois. He is of Spanish and Swedish descent. He was raised primarily in Van Nuys, California, where his father was a college professor.

Saenz was the lead singer for the David Lee Roth-era Van Halen tribute band Atomic Punks from May 1994 to December 2008, where he used the stage name David Lee Ralph. He was briefly the lead singer for L.A. Guns, singing on the Wasted EP. He also has sung for the bands 7% Solution, First Cause, Longgone, and Nightfall. The latter was featured on the KNAC radio sponsored Pure Rock compilation, with Ralph going under the name Michael Saenz.

Saenz appeared briefly in the 2001 film Rock Star, seen in the glass booth auditioning when Mark Wahlberg‘s and Jennifer Aniston‘s characters walk into the audition. He glares at the two before Wahlberg‘s character takes his turn to audition. He provided background vocals for AFI on the albums Sing the Sorrow and Decemberunderground.

Saenz and his wife, Jocelyn, live in Los Angeles, California. He received a Phd. in English from University of California – Berkley in 1991.”