In regard to what the writing and recording was like this time around, Foxx advised: “It was kind of the same thing for me: Satchel tells me what to play and I play it. Satchel wrote a bunch of really cool tunes that are a lot different than anything we’ve 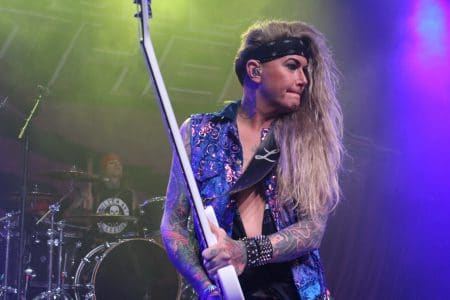 done off our previous records. It’s so different from our other records; I think we are going to reach a lot of new fans with this as well. People who haven’t heard us before, or even if you don’t like us, give this record a chance. It’s definitely my favorite record, that’s for sure.”

In terms of what fans can expect at the upcoming Steel Panther shows, Foxx indicated: “This one is going to be a lot different because we’re going to play a lot of new songs off the record. We might even hair solo, we haven’t done that in a long time. We are also going to have monkeys and snakes coming down off the rafters, but we don’t want to let people know that right now; they might scare them, but at the same time they are very entertaining. We thought if we brought something else into the crowd other than us it would be entertaining, it will bring a whole different element to the show while we are still playing a lot of new songs off Heavy Metal Rules.”

With respect to everyone seemingly having a good time at a Steel Panther concert, Foxx stated: “That’s the most important no matter what, all the time. As long as everyone has a smile on their face – whether it be through song or something they find funny. That’s what we try to do: give them an hour and half to get out of whatever they are going through and to enjoy themselves. Whatever they find entertaining, that’s what our job is. We are happy so many people keep coming back.”

You can read the rest of the interview with Lexxi Foxx at Cryptic Rock‘s website.