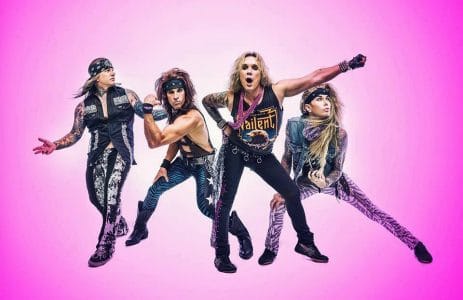 “As the music industry waits for a time when touring can return and fans can gather to celebrate the music of their favorite artists again, Steel Panther has begun another charitable endeavor to help support concert photographers that have been sidelined since the Covid-19 pandemic began. Aside from venues, promoters, support staff, and patrons – concert photographers have had no performances to cover since March 2020. Steel Panther has decided to partner with 7 of their longtime collaborators to curate a virtual photo exhibition of each individual’s work for a 2-week period. Each photographer has captured the band with their lens at various points of their career.

Fans can purchase exclusive prints that were hand-picked by the band and photographers in various configurations with the profits going to help each photographer during this touring shutdown. All images are available as a Premium Matte Poster, Framed Print or Framed Canvas with prices starting as low as $24.99. The photo exhibition will be available to see and purchase here.

To coincide with the launch of each gallery, an individual band member will interview the photographer about their work, any memories from covering Steel Panther, and allow fans to interact with them when time permits. The first gallery will be by legendary photographer Niall Fennessy who has been following the band for years. Drummer Stix Zadinia will sit down with Niall at 12:00PM PST on February 1st for a chat. The conversation will be available online afterwards and fans can go here to check out the conversation. A new gallery will be available for fans to peruse and purchase and every 2 weeks.

The schedule for photographers is:

“You see them all the time. They block your view for the first 3 songs and you may even kick them in the back of the head while crowd surfing, but these unsung heroes never complain or kick you back. These photographers have been friends of Steel Panther for a while and we decided for all they have done for us, this was the least we can do. So grab your fancy berets and prepare to learn a thing or two from Steel Panther photography exhibit Sex, JPGs and Rock & Roll. Admission is free so don’t be cheap and buy something to support these artists.” – Steel Panther“