In what has started to be a very entertaining feud, Steel Panther have replied to Mötley Crüe bassist Nikki Sixx‘s accusations that they are “backstabbers” and “assholes” after Steel Panther frontman Michael Starr made a joke at Vince Neil‘s expense in a recent interview with Little Punk People. 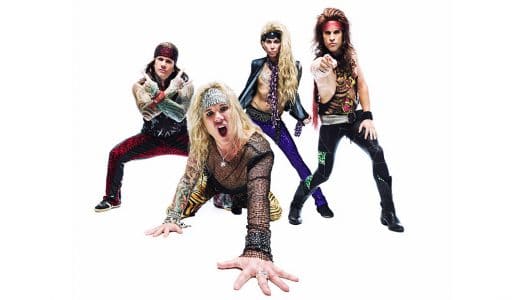 During an interview with Little Punk People, Starr and drummer Stix Zadinia were asked which musician they would bring back from the dead to which Starr indicated (as provided by Metal Injection): “I’d bring back the Vince Neil from back in the day because that guy is dead.”

“The singer in steal panther can go fück himself… wanna be band putting down @thevinceneil?”

When a fan pointed out that Steel Panther sometimes play Mötley Crüe songs, Sixx tweeted: “That’s why they are assholes. Backstabbers.”

“In order to stab someone in the back, you have to have been somewhat cordial to begin with.”

Steel Panther posted the following message on their Facebook account, “Hey Siri, what’s “backstabbing”? Siri:”, with an older video of Sixx, guitarist Mick Mars, drummer Tommy Lee and singer John Corabi (who replaced Vince Neil after the latter left Mötley Crüe in 1992) being asked hat they thought of Neil suffering a few broken ribs and some internal injuries while jet skiing a few weeks prior.

Mars first piped in stating (as transcribed by Sleaze Roxx): “My heart goes out to him… What happened to the coral reef though?”

Sixx then added: “Hey, when 300 lbs of blubber land on the coral reef, you know there was [laughs] some dust flying around [laughs].”

Wikipedia states the following about Neil‘s departure from Mötley Crüe: “After Decade of Decadence, Neil left in February 1992, at a time when other bands in the 1980s glam metal scene (Ratt, Stryper, White Lion, Winger, Europe, and Britny Fox) broke up amid the advent of grunge. Controversy persists over whether Neil was fired or quit. Sixx has long maintained that Neil quit. However, Neil insists that he was fired. “Any band has its little spats,” Neil observed in 2000, “and this one basically just stemmed from a bunch of ‘fuck you’s in a rehearsal studio. It went from ‘I quit’ to ‘You’re fired’ … It was handled idiotically. The management just let one of the biggest bands in the world break up.”