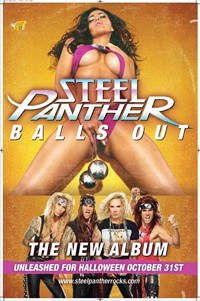 Steel Panther Poster Gets Banned For Being ‘Overtly Sexual’

An ‘overtly sexual’ adverting campaign featuring a semi-naked model leaning back in a pose ‘suggestive of an orgasm’ has been banned, reports Suzannah Hills of the Daily Mail.

The poster for comedy metal band Steel Panther’s new album showed the woman with her eyes closed with one hand on her crotch while two silver balls dangled between her legs.

The title of the band’s latest album ‘Balls Out’ was printed over the picture – with the resulting image deemed likely to cause ‘serious and widespread offence’.

A string of complainants objected to the promotion, running nationwide in October, claiming it was degrading and unsuitable for public display where it could be seen by children.

The Advertising Standards Authority (ASA) decided that while the poster – which also featured an image of the band – did not aim to demean women, it ruled the advertisement could not appear again.

The ASA stated: ‘We considered that the main image on the poster was overtly sexual.

‘We noted that the pose of the woman showed her with her legs apart, her hand between her legs and her breasts partially exposed, and considered that her facial expression was suggestive of an orgasm and sexual activity.

‘In addition to this, we considered that the album title ‘Balls Out’ was sexually suggestive particularly when viewed in the context of the poster, where the woman was seen dangling two silver balls between her legs in a way that we considered was suggestive of male genitalia.’

The advertising watchdog added that music giant Universal defended the poster when approached by the ASA claiming its style was ‘very tongue in cheek’.

‘They said the poster was designed to have a retro 80s look which was not done seriously and poked fun at the ridiculousness of the attitude to women, outfits and music in that era,’ it added. ‘The poster was meant to be ludicrously over the top and not meant to undermine women.’

But the ASA concluded most viewers would not interpret the image as intended. It said: ‘Even if they had viewed it in that context, the poster was overtly sexual when taken as a whole.’

‘Given its placement in a range of public locations, we concluded that it was likely to cause serious and widespread offence, was unsuitable to be seen by children and therefore was not appropriate for outdoor advertising.’

Universal Island Records, a division of Universal Music, admitted more care could have been taken in the siting of the posters.

Steel Panther, from Los Angeles, California, is a pastiche of an 80s heavy metal band, known for its profane lyrics and exaggerated on-stage routines.