Steel Panther continue to air new Cineminute episodes on Steel Panther TV with their take on some classic movie scenes with their latest one titled Sling Blade based on the movie of the same name released back in 1996. 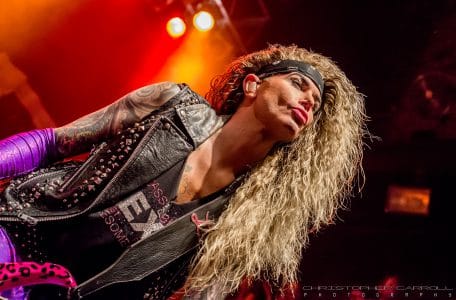 Wikipedia states the following about the movie Sling Blade:

“Sling Blade is a 1996 American drama film written and directed by Billy Bob Thornton, who also stars in the lead role. Set in rural Arkansas, the film tells the story of a man named Karl Childers who has an intellectual disability and is released from a psychiatric hospital, where he has lived since killing his mother and her lover when he was 12 years old, and the friendship he develops with a young boy and his mother. In addition to Thornton, it stars Dwight Yoakam, J. T. Walsh, John Ritter, Lucas Black, Natalie Canerday, James Hampton, and Robert Duvall.

The film was adapted by Thornton from his previous screenplay for the short film Some Folks Call It a Sling Blade, directed by George Hickenlooper. Sling Blade proved to be a sleeper hit, launching Thornton into stardom. It won the Academy Award for Best Writing, Adapted Screenplay, and Thornton was nominated for Best Actor in a Leading Role. The music for the soundtrack was provided by French Canadian artist/producer Daniel Lanois.”