Steel Panther have teamed up with American actor and comedian Rob Riggle to come up with a song for Thanksgiving titled “Thanks Again.” Steel Panther provided the music while Riggle penned the lyrics. 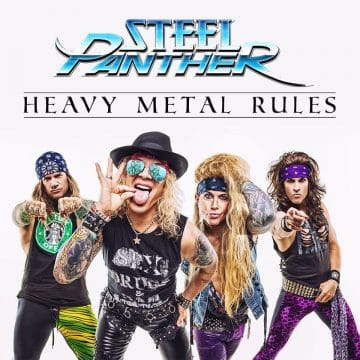 “ICYMI, we collaborated with Rob Riggle to bring you the #Thanksgiving song you never knew you needed!! Shout out to Rob and NFL on FOX for having us!!

Wikipedia states the following in part about Riggle: “Robert Allen Riggle Jr. (born April 21, 1970) is an American actor and comedian. He worked as a correspondent on Comedy Central‘s The Daily Show from 2006 to 2008, as a cast member on Saturday Night Live from 2004 to 2005, and for his comedic roles in films such as The Hangover, The Other Guys, Let’s Be Cops, Dumb & Dumber To, 21 Jump Street, 22 Jump Street, The Goods: Live Hard, Sell Hard, and Step Brothers. He has also co-starred in the Adult Swim comedy-action series NTSF:SD:SUV::. He has provided voice work for The Lorax and Hotel Transylvania 2. In 2012, Riggle replaced Frank Caliendo for the comedy skit and prognostication portions of Fox NFL Sunday.”