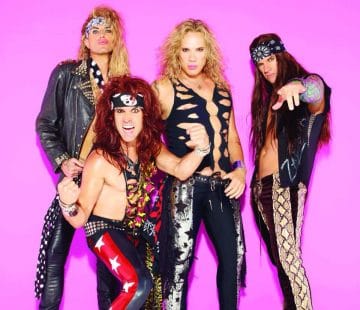 Glam metal rockers Steel Panther have released a new video for their song “Wasted Too Much Time” which features Stone Sour who they will be embarking on tour with starting on September 24, 2017 at the Sokol Auditorium in Omaha, Nebraska, USA

Sleaze Roxx stated the following in its review of Steel Panther‘s latest studio album Lower The Bar: “Lower The Bar — what a great fucking title! Steel Panther may be telling you that they are lowering the bar but in reality they are raising the bar for releasing one great studio album after another! If you loved Steel Panther before, odds are that you will love Steel Panther‘s latest studio album as well because the guys are offering more of the same — ridiculous sexually charged and ahem… demeaning lyrics to women, great guitar riffs, awesome melodies and more sing along moments in one song than most bands can muster in an entire album. If you don’t like Steel Panther, you likely won’t like Lower The Bar but if that’s the case, you should really give your head a shake for not liking likely and arguably the best metal band of the last ten years.”