There is always a risk when you invite random fans onstage that one of them may not have the best intentions. 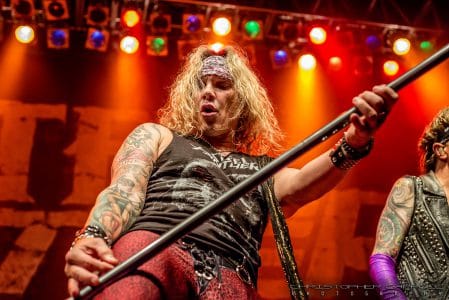 At a recent Steel Panther show at the House Of Blues Restaurant & Bar in Las Vegas, Nevada, USA, a “fan” walked across the stage before stopping next to Steel Panther frontman Michael Starr and attempting to hit him in the penis area before throwing a punch to him. Luckily, Starr was apparently able to block both attempted blows.

Thank you to Christopher Carroll at the closed Facebook group Your Backstage Pass! for reporting this.

Sleaze Roxx noted as follows in its concert review of a Steel Panther show in London, Ontario, Canada back in November 2015: “For the next four or five songs, it seemed that there were many women / girls onstage dancing away which is always a trademark of a Steel Panther show. One married female fan by the name of Jeannie I believe was a very good sport during the song “Girl From Oklahoma” singing the track’s funny lyrics to the delight of Starr and company. I was actually very impressed with drummer Stix Zadinia who played most of the song “17 Girls In A Row” with a good looking female fan on his back or seated directly behind him without missing a beat. Apparently just another day at the office for the Steel Panther drummer! In between the female dancing fans appearing onstage, Satchel also put on an entertaining guitar solo playing snippets of well known popular heavy metal songs to the crowd’s satisfaction.”

During a show at the House of Blues in Las Vegas, A feminist in the crowd walks on stage and attack’s Michael Starr from the band Steel Panther.