Glam metal rockers Steel Panther will be starting their Europe and U.K. leg of their Heavy Metal Rules Tour with special guests Wayward Sons in Tallinn, Estonia on January 18, 2020. 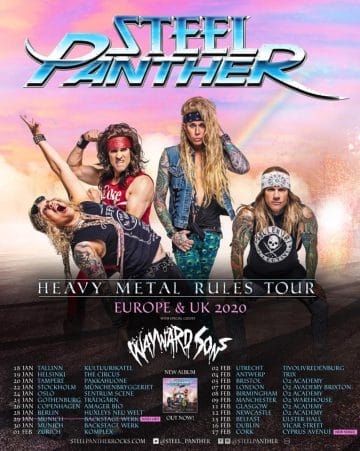 Sleaze Roxx stated the following in its concert review of Steel Panther‘s tour stop at Rebel in Toronto, Ontario, Canada on December 2, 2019:

“Steel Panther kicked off their set with the very engaging “Eyes of A Panther.” I was surprised to hear “Let Me Cum In” make its welcomed way back into their set. Next up was the comedy exchange between guitarist Satchel and frontman Michael Starr. Their attention would get diverted by the many young ladies in attendance showing off their “boobs” to the band members. Satchel and Starr were more than happy to stop what they were saying and put the attention on those female participants whenever a “boob” sighting occurred. As usual, the introduction to the band members took place right after the second song with Satchel referring to his other band members as his “employees.” I can’t remember all that was said but Satchel took a funny dig at Mötley Crüe frontman Vince Neil while introducing Starr to the audience. I believe that Satchel indicated that Starr was still able to fit into his spandex pants that dated back to 1981 or so which wasn’t the case for Neil. It was kind of funny knowing the rather petty comments that Nikki Sixx had hurled Steel Panther‘s way of late after the former heard that Starr had “insulted” (really made a joke about) Neil‘s singing (or lack of it) during an interview. By the way, I’d much rather go see Steel Panther perform live any day than Mötley Crüe.

Despite giving a lukewarm review for Steel Panther‘s new studio album Heavy Metal Rules, I thought that many of the songs on the record could come alive in a live setting and that was indeed the case on this night. Before the third song of the evening which turned out to be the new album’s first single (and one of the better songs) “All I Wanna Do Is Fuck (Myself Tonight)”, Starr indicated to the audience that he rarely asked them to do stuff but that he’d love if they all started jumping at the start of the song and many people in the audience obliged him in that regard (of note, that might have actually occurred before the song “Let Me Cum In”). “All I Wanna Do Is Fuck (Myself Tonight)” had what seemed like the entire audience brandishing their fists in the air whenever the song lyrics got to “Fuck Myself Tonight.” Clearly, this is a song that will be in Steel Panther‘s set for many years to come. I was also impressed with the new song “Fuck Everybody” which also had the crowd singing along. Then again, how can the audience not participate when you just have to scream “Fuck! Fuck!”? The surprise of the night was the ballad “I Ain’t Buying What You’re Selling” which had seemingly the entire audience pull out their cell phones at Starr‘s request. It was a beautiful moment and one of the highlights of the night.”