Steel Panther have announced that they will be playing their debut album Feel The Steel in its entirety on one night only for their upcoming concert at the O2 Shepherds Bush Empire in London, England on Monday, January 22, 2018. 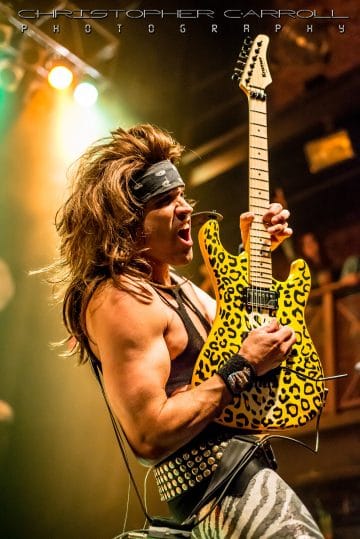 “LONDON!! Have we got something special for you and it doesn’t even require a shot of penicillin afterward. Monday, January 22nd at our show at O2 Shepherds Bush Empire and for ONE NIGHT ONLY, we’re going to be playing ‘FEEL THE STEEL‘ in it’s entirety!! BE THERE!”

Sleaze Roxx stated the following in its review of Feel The Steel:

“Steel Panther are, by far, the greatest 80’s band to… well, not come from the 80’s! Their debut album Feel The Steel oozes with so much sleaze that the CD should come housed in a 50 gallon drum. How appropriate is it that this album is being reviewed for Sleaze Roxx?

The undisputed kings of the Sunset Strip have been together since 2000 when they appeared as Danger Kitty in the now-infamous Discover Card commercials. The band has undergone several name changes in the last nine years, from Danger Kitty to Metal Shop, then to Metal Skool and finally Steel Panther. Even with all the name changes, these guys fucking rock and they sure as hell do not take things, or themselves, too seriously.

I usually try and review an album track-by-track, but seeing as this album is so exceptional I know I would go on and on forever. Instead I will just point out a few of my favorites, which will be difficult as there isn’t a dud in this twelve song helping of sex, drugs and rock n’ roll!”