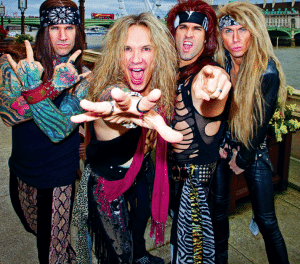 Glam metal rockers Steel Panther have “unofficially” announced that they will be releasing an acoustic live album in February 2016. 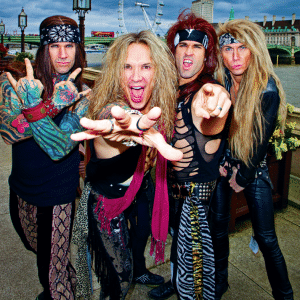 Steel Panther lead vocalist Michael Starr and drummer Stix Zadinia were interviewed by South Detroit Soundhouse on December 13, 2015. South Detroit Soundhouse “confronted” Starr and Zadinia about a leak concerning a Steel Panther acoustic live album that was coming out in February 2016 to which Starr replied (see 8:09 mark of video below): “[It’s] shocking to hear news like that. Yes. It’s not finalized but…” before Zadinia interrupted and stated, “You can’t say it but do this. If it’s true, blink once. If it’s false, blink twice” before advising Starr to only blink once. Starr went on to state, “Don’t tell the title but the title is really cool. We fought tooth and nail with the record label regarding the title because they wanted us to change it and I said [screaming] ‘No. I ain’t changing nothing!’ And we didn’t. So you’re going to love the title. It’s fucking sexy and it rhymes with Lexxi.”

“Over The Top” is only one of the many ways you could describe those good ol’ boys from Cali. Steel Panther dropped by the SoundHouse and gave us all a run f…