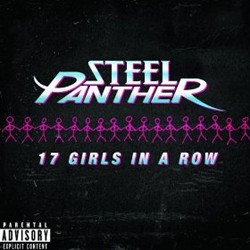 Steel Panther’s new single “17 Girls In A Row” is now available for download at iTunes and Amazon.com. After downloading, feel free to play it 17 times in a row because you fucking can!

The legends of the Sunset Strip, Steel Panther, are getting ready to release their sophomore album ‘Balls Out’ via Universal Republic Records. The album will be released on November 1st and will continue the raucous tradition of the band’s 2009 debut, ‘Feel The Steel’.

The latest album features 14 soon to be classics such as “Just Like Tiger Woods,” “Gold Digging Whore” and “Weenie Ride.” The album also features cameos by Dane Cook on the album opener “In The Future” and Nickelback frontman Chad Kroeger and Extreme axeman Nuno Bettencourt show up on an instant classic, “It Won’t Suck Itself.” ‘Balls Out’ was produced by Grammy nominated producer/mixer Jay Ruston who produced the band’s ‘Feel The Steel’ debut and is known for his work with Anthrax, Meatloaf, The Donnas and Morrissey to name a few.

The first single from Balls Out is “17 Girls In A Row” and will be impacting at radio over the next few weeks. The song showcases the band’s ability to write memorable hooks while mixing them with their signature style lyrics like “I banged 17 girls in a grocery store and never lost my erection.” With its driving opening drum beat and infectious guitar riff, “17 Girls In A Row” will be sure to heat up rock airwaves and give it a much needed kick in the balls – no pun intended.

Steel Panther was, for a long time, rock’s best-kept secret: a cult legend on the LA scene. But in recent years due to the success of their debut, the band has enjoyed huge acclaim from fans and peers alike. At sell-out club shows in Hollywood and Las Vegas, Steel Panther has been joined on stage by rock and roll icons such as Steven Tyler of Aerosmith, Paul Stanley of KISS, Corey Taylor of Slipknot, Tom Morello of Rage Against The Machine/Audioslave, Chester Bennington of Linkin Park and Green Day to name a few. Across the Atlantic, the band has shared arena stages with ZZ Top and rocked an audience of 30,000 at the UK’s Download festival. In Germany, ‘Feel The Steel’ was proclaimed ‘Best Debut Album’ at the Metal Hammer awards. The band will be heading out on a UK tour with Def Leppard and Motley Crue in December before coming back to start a nationwide tour of the US in 2012.