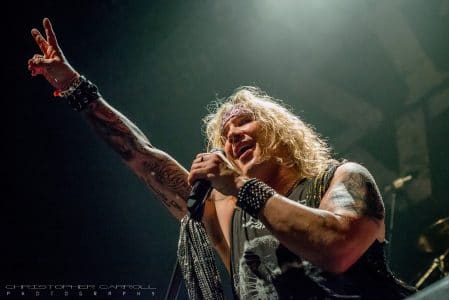 Sleaze Roxx has often regarded Steel Panther as having the total package from the great music to the very entertaining concerts to the total glam retro look. Apparently, Starr feels a band’s look is “really really important” as he stated:

“Music came into my life at a super, super young age, and my first experience of music was with The Beatles on vinyl. And then my second experience of music was The Beatles on eight-track. And then the one experience of music that changed my life, amazingly enough, was when I listened to Van Halen for the first time in 1978. That combination of harmony and rad guitar playing, and a sexy lead singer with long blond hair and hot chicks, that’s what started me in music. The look is the most important thing. I would say this; if I was to go out to a club and pick up on a girl, I’m not going to look for her insides, I’m going to look for her beautiful outsides first. Once I find the beautiful outsides we can talk about what’s on the inside. The look is really, really important. I wanna look at a band and see guys that look good, are physically in shape and can dance and sing. I think that’s important.”

With respect to partying, Starr stated: “You’ve gotta be careful of that, man. Some people, they overindulge. Look, partying’s good for you. It’s a good release for your body, you need it, it’s fun, people enjoy it. But if you start stealing money from your mom, and you’re selling shit, and you’re doing heroin and you lose your job, that’s not partying, that’s becoming a drug addict. There’s a fine line. If somebody has a problem with it, it’s probably not a good idea. But if someone doesn’t have a problem with it, and they’re parting hard, that’s called having fun. And you might as well do it while you can because when you get to my age, you need a lot of steroids to stay alive.”

Apparently, groupies continue to be a big deal as Starr opined: “The groupie scene is a still big deal. It’s kind of like the lifeline for heavy metal guys. I always like to think that our groupies are more crazy than a lot of the groupies for other bands, because our songs are about partying and fuckin’, so when you come to our show that’s what you have on your mind. Without groupies there’s no reason to rock. They’re the reason why I wanted to be a singer!”

Steel Panther have just released a video for their cover of Cheap Trick‘s “She’s Tight” which features Robin Zander and which will be on Steel Panther‘s new studio album Lower The Bar, which is scheduled for release on February 24, 2017.