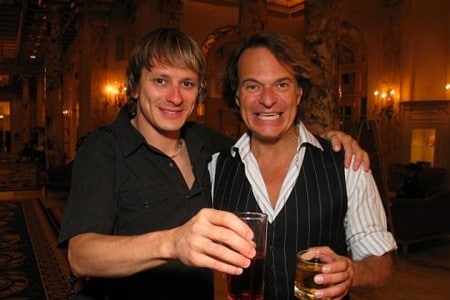 Luzier stated (see starting at 4:06 mark of video below): “I’m the original drummer in Steel Panther. So not a lot of people know that. They don’t believe it but um, I was in a band called Metal Shop back in the mid-’90s to late ’90s and you know they had the wigs, the Target shirt, playing to you know twelve people at The Viper Room.”

When the interviewer suggested that it was the “Boogie Nights of Metal”, Luzier replied: “Absolutely. Yeah. I did Boogie Nights. I did the Spazmatics. I did anthems, ’70s classic rock.  I paid my bills for many years you know? I was not into it at the beginning because I was like, ‘Man, this is stupid. We’ve 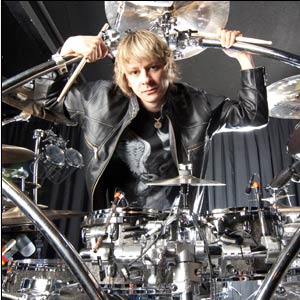 got wigs on. We’re playing Mötley Crüe and Whitesnake covers. What are we doing?’ You know? And then all of a sudden, Chad Smith from the [Red Hot Chili] Peppers would show up. Steven Tyler [of Aerosmith]… All these people… And they started sitting in with the band you know? We did ‘Walk This Way’ with Steven Tyler. The next thing you know, the buzz around Hollywood was, like, ‘Why is there celebrities showing up to this Viper Room cover night on a Monday night at midnight?’ The next thing you know, lines on both sides of the boulevard — selling out, selling out. And I got to a point where my original band and David Lee Roth were touring so much that I was missing so much of it that my sub, Darren Leader [Stix Zadinia], became the full-time member and now they’re still killing it. They do great out there. I’ll show up at a festival in London and I’ll see Dave up there, I mean uh, Steel Panther and Korn right across from each other. It’s awesome. They’re my bros. I love ’em.”

Ray Luzier, drummer of Korn, sat down with us for an interview during NAMM 2016 at Vic Firth booth to discuss his new signature drumsticks, to share his exp…