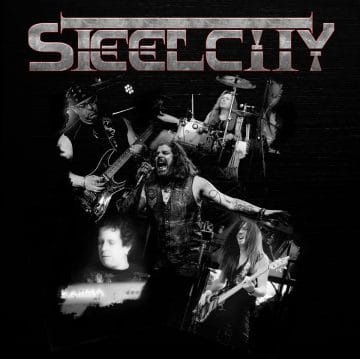 “We have been keeping a lot of secrets the last few months as we gear up for this final two-part SteelCity announcement. In life things are always changing, evolving and growing. As with anything, people are always looking to out do themselves, surpass their own expectations, take things to another level, reach new heights and hit maximum speed!

We were happy to announce the first step in that process with Roy Cathey coming on board as SteelCity‘s new singer/front man. He will no doubt take the band to another level with his amazing vocals, charismatic personality and on fire stage show.

Mike Floros has already stepped up with the material that will expand the band’s sound; while satisfying arena rock music aficionados and fans of “guitar hero” type music. However, not alienating what people enjoyed about the band’s release, FORTRESS.

Roy and Mike are not alone here though, as SteelCity is back with some new and familiar faces! Bj Zampa – Drums, Jason Cronwell – Bass and Tony Stahl – Keyboards.

We would like to thank Scott and Ron for the time they gave to us and the kick ass performances we had with them. They have not been replaced and will always have a place in SteelCity. However, they could no longer commit, due to their own schedules, and had to move on.

Setting out to replace nearly an entire band was daunting, of course. Both Mike and label felt IF we were going to undertake such a challenge, it could not be a lateral move. We had to raise the bar, we had to take things to the next level and reach maximum speed. The next album is a game changer for us in many ways, and will not necessarily be a follow up, but more so, “new territory”. So, how do we express all of this? What are we saying here? Well, strap yourself in, as SteelCity is about to take things to the next level when Roy, Mike, BJ, Jason and Tony hit MACH II this Spring!

Oh and YES, there WILL be live shows. You can count on that!”