SteelHeart have released a video for their new ballad “Lips Of Rain’ from the upcoming new album Through Worlds Of Stardust, which will be released via Frontiers Music Srl on September 15, 2017. The video premiered today on Ultimate Classic Rock, which stated in part (with slight edit): 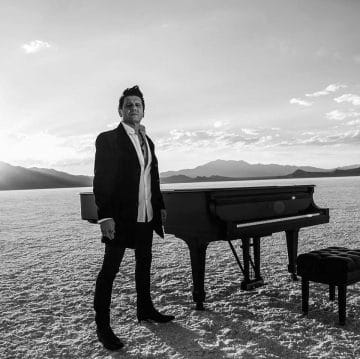 Directed by frontman Miljenko Matijevic, the clip was partly filmed at the Bonneville Salt Flats in Utah; according to band reps, the crew shot in the Flats for three days during a heat wave boasting temperatures in the high 90s. Other footage was shot in the more temperate Malibu Hills.

“Lips of Rain” follows the release of Through Worlds of Stardust‘s first single, “You Got Me Twisted,” which debuted last month.

The album, due in stores Sept. 15, ends a nearly decade-long drought between full-length releases from the band, and finds Matijevic reunited with Steelheart veterans such as guitarist Uros Raskovski, bassist Rev Jones and drummer Mike Humbert.

“I cannot express how excited I am for you all to hear this new album,” Miljenko enthused in a press release. “Our focus was to bring back the magic in the music with songs that have been lived, loved, laughed and struggled. I best describe this album as ‘deep, sexy, loving, twisted, romantic and hungry rock ‘n’ roll.’”