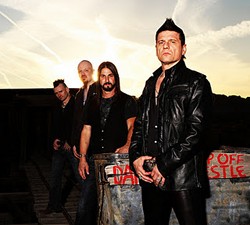 Steelheart To Release New Album In 2012

On October 31, 1992 (Halloween night), exactly 19 years ago tonight in Denver Colorado, a horrible tragedy took down one of Rock’s premiere bands during a live concert. Steelheart, led by Miljenko ‘Mili’ Matijevic, arguably one of the best male rock vocalists to ever grace the stage, miraculously survived the tragedy — however the band Steelheart as we all knew it died that night.

Today, October 31, 2011, Miljenko ‘Mili’ Matijevic is alive and well with a voice that still places him in the category of ‘One Of The Best Male Vocalists Of All Time’… and he is pumping out some outstanding work so stay tuned because Mili is just warming up!

To mark this day Steelheart has unveiled a new website — www.steelheart.com — filled with music, videos, reviews, news, blogs, photos, podcasts and so much more. Steelheart just wrapped up a very successful tour over the summer with rave reviews and a new album is expected to be released in 2012 with all new music and a world tour to support it.

Steelheart promises to please their long time die-hard fans as well as gain the interest of many new fans!