Former Ratt band members, Stephen Pearcy and Juan Croucier, played together again on the same stage when Croucier joined Pearcy and his solo band for a few Ratt classic songs consisting of “Back For More” and “Round And Round” at the M15 Concert Bar in Corona, California, USA on May 14, 2016. 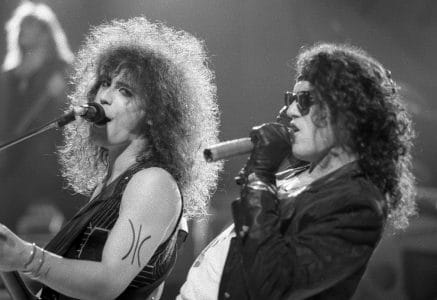 Both Pearcy and Croucier have been touring of late with their own bands playing their versions of the Ratt classics with each handling the lead vocals in their respective bands.

Sleaze Roxx stated the following in its concert review of Ratt’s Juan Croucier‘s show at the Rockpile in Toronto, Canada back on September 26, 2015: “By the time that Ratt’s Juan Croucier hit the stage, most of the audience it seemed were inside the general admission area waiting in anticipation for what turned out to be one of the best concerts that I have seen this year. I seem to be saying this a lot lately but the last five concerts that I have attended have ranged from good to excellent and the performance from Ratt’s Juan Croucier on this night was definitely at the excellent range of things.”

Seven months later, Sleaze Roxx stated the following in its concert review of Stephen Pearcy‘s gig at the Rockpile in Toronto, Canada on April 29, 2016: “Ratt‘s former frontman Stephen Pearcy and his band simply killed it at The Rockpile in Toronto. A rabid crowd, great setlist and killer atmosphere (at least from the general audience standing area) makes for one hell of a concert!”

Back For MoreRound And Round