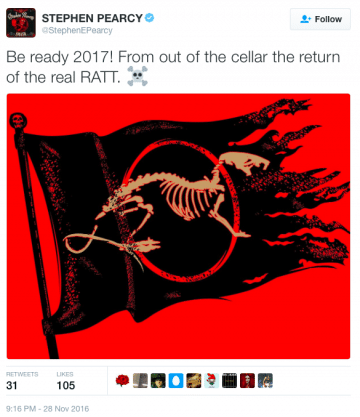 Ever since the United States District Court, C.D. California’s ruling on November 8, 2016 where Juan Croucier defeated Bobby Blotzer (or WBS, Inc.) with respect to whether Croucier had committed trademark infringements by amongst other things using the Ratt logo and name to advertise his band Ratt’s Juan Croucier back in the fall 2015, original Ratt frontman Stephen Pearcy has been giving hints that he will be “ratt n’ rolling” with Ratt once again.

A message on Pearcy‘s Twitter account was posted in the evening of November 28, 2016 stating: “Be ready 2017! From out of the cellar the return of the real RATT. ☠️”

Blotzer (via WBS, Inc.) was delivered a presumably devastating blow when the United States District Court, C.D. California decided that the corporation WBS, Inc., of which Blotzer and guitarist Warren DeMartini are the sole shareholders, and which Blotzer has purported owns the Ratt name and brand, did not have ownership interest in the Ratt marks.

The aftermath of the United Stated Court District’s decision on November 8, 2016 remains to be seen. Presumably, Blotzer via WBS, Inc. has a certain amount of time to appeal the decision and if he fails to do so, Croucier, Pearcy, Blotzer and DeMartini would presumably all be part of the original Ratt partnership agreement, which would pave the way for the return of the “real” Ratt.