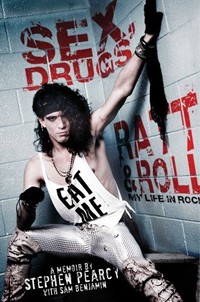 The 288 page autobiography is being billed as a jaw-dropping tell-all from the lead singer of the 1980s supergroup Ratt: the groupies, the trashed hotel rooms, the drugs — and just how much you can get away with when you’re one of the biggest hair metal stars of all time.

In the mid-1980s, Ratt, alongside Motley Crue, Poison, and Quiet Riot, were laying down the riffs and unleashing the scissor kicks that would herald the arrival of music’s most flamboyantly debauched era. Now with ‘Sex, Drugs, Ratt & Roll’, Ratt frontman and chief rabble-rouser Stephen Pearcy divulges all the dirty details of the era when big-haired bands ruled the world.

Stephen was primed for a life of excess from an early age — his father died of a heroin overdose when he was twelve, and by the age of fifteen, Stephen was himself a drug addict. When Stephen met the thrill-seeking Robbin Crosby, he knew he’d found his perfect partner in crime — both in music and partying. Ratt’s 1984 debut single, “Round And Round”, became one of the top-selling metal songs of all time, but it was the band’s off-stage escapades that were the stuff of legend. “Our tour bus is like our pirate ship, it’s where we rape and pillage,” said Pearcy in 1987. Now Pearcy’s memoir reveals all the rock star excess — the partying, the women, the $2,000-a-day drug habits — letting fans see into this harrowing hair-metal lifestyle and what it’s really like behind the scenes when you’re a rock star.