Drummer Bobby Blotzer‘s various court proceedings against his former Ratt bandmates took another turn for the worse. Ratt frontman Stephen Pearcy was recently successful as the defendant bringing a motion for summary judgment to defeat the claims brought by Blotzer‘s WBS, Inc. regarding trademark infringement and dilution, unfair competition, false designation of origin, and intentional and negligent interference of economic relations.

“In 1987 [likely meant to write 1977], Defendant Stephen Pearcy (“Pearcy“) formed the band now commonly known as “RATT.” Pearcy initially named the band “MICKEY RATT,” and started out by playing in local bars and clubs in southern California and Nevada. On January 1, 1980, the band relocated to Los Angeles. At that time, the band consisted of Pearcy, Chris Hager, John Turner, and Tim Garcia. All the band members, with the exception of Tim Garcia, relocated to Los Angeles. According to Turner, upon relocating to Los Angeles, Pearcy decided the band would drop the word “Mickey” from its name and would be renamed “RATT.” As part of the rebranding process, Pearcy designed a new logo for the band to be featured on singles. Pearcy personally paid for “several hundred pressings of each such recording.” By 1981, Pearcy had designed, adopted, and commercially used the RATT logo.

During 1981 and 1982, several members joined and departed the band. By 1983, none of the musicians performing with RATT prior to 1982 remained in the band, with the exception of Pearcy himself. By 1983, RATT was comprised of Pearcy, Robbinson Lantz Crosby (“Crosby“), Warren DeMartini (“DeMartini“), Juan Carlos Croucier (“Croucier“), and Robbert Blotzer (“Blotzer“).  In early 1984, RATT become nationally known when they released the album “Out of the Cellar.” The album was certified as triple platinum by the Recording Industry Association of America and reached number seven on the Billboard 200. The RATT logo was featured on the front cover of the multi-platinum release.

Around May 1997, Plaintiff WBS, Inc. (“WBS“) was formed by three of the four remaining partners: DeMartini, Blotzer, and Pearcy. Croucier did not participate in the formation of WBS. According to Pearcy, WBS was formed to handle aspects of the then newly-revived RATT band’s touring business, separate and apart from the Partnership. According to Pearcy, WBS was required to tender 1,000 shares of stock in the WBS Corporation as consideration for his participation in WBS. Pearcy never received the shares, despite numerous requests. Instead, Pearcy states, Demartini and Blotzer expelled him from WBS. 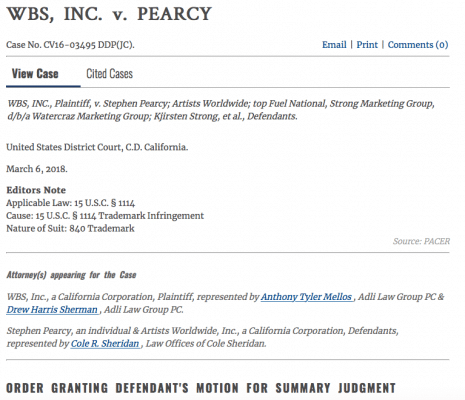 Around February 2001, Pearcy brought an action against WBS, Blotzer, DeMartini and others in Los Angeles County Superior Court (“Pearcy State Court Case”). Pearcy alleged he was wrongfully removed as a corporate officer of WBS after being defrauded of his stock interest in the company. In the Pearcy State Court Case, the answering defendants filed a counterclaim, which Pearcy “materially lost.” Pearcy has appealed the outcome, alleging ineffective assistance of legal counsel. The state trial court’s judgment did not make any determination regarding the composition of the Partnership or the purported trademark assignment.

In 2015, WBS sued Croucier after he began using several RATT trademarks (the “Croucier action”). WBS claimed that four RATT-related trademarks, such as the band name, logo and associated trademarks were registered with the United States Trademark and Patent Office (“USTPO”) in 1985 and 1986 by the RATT partnership. WBS further alleged that on June 2, 1997, “the [trademarks] were assigned through a sale of a partnership along with all assets owned thereby to [WBS],” and that WBS recorded the assignment with the USTPO in 2015. WBS maintained that Croucier had been expelled from the Partnership prior to June 1997, and that his authorization to transfer the marks to WBS was therefore not necessary.

In the Croucier lawsuit, this Court concluded, on cross motions for summary judgment, that there was no evidence that Croucier had been formally expelled from the Partnership prior to the purported assignment of the marks to WBS. Because Croucier never consented to the assignment, as required by the Partnership Agreement, the assignment was invalid. Thus, this Court determined, WBS could not show that it had an ownership interest in the marks.

This case, brought by WBS against Pearcy, is a close analogue of the Croucier action. WBS again alleges that it is the owner of the RATT trademarks, which it obtained via an assignment from the Partnership. WBS alleges that Pearcy is infringing upon those marks, and brings claims for trademark infringement and dilution, unfair competition, false designation of origin, and intentional and negligent interference of economic relations.”

In determining that Pearcy should succeed in his motion for summary judgment against Blotzer‘s WBS, Inc., District Justice Pregerson stated (without the citations):

“Pearcy has adequately demonstrated the absence of any genuine issues of material fact. Plaintiff cannot prevail on its trademark infringement-based causes of action without proving that it has an ownership interest in the RATT trademarks. An invalid assignment of a trademark conveys no rights to that mark.

Plaintiff alleges that it obtained an ownership interest in the trademarks in 1997 when the RATT Partnership assigned the marks to WBS. Pearcy has presented uncontroverted evidence, however, that the members of the RATT Partnership did not unanimously consent, either in writing or otherwise, to the assignment of the RATT marks to WBS. Thus, any purported assignment of the marks to WBS was invalid, and conveyed no rights. Because no reasonable trier of fact could conclude that WBS had an ownership interest in the RATT marks, Pearcy‘s motion for summary judgment must be granted.”