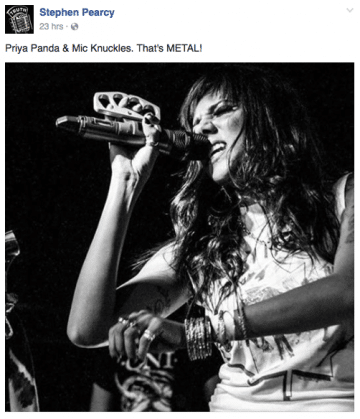 It does not get any better than having one of your childhood idols publicly recognize you and that is what has occurred to Diemonds‘ frontwoman Priya Panda as Ratt lead vocalist Stephen Pearcy posted the following ringing endorsement of the female singer’s use of his custom mic knuckles via his Facebook account: “Priya Panda & Mic Knuckles. That’s METAL!”

Panda subsequently posted the following on Diemonds‘ Facebook page: “Been a fan of Stephen Pearcy and the ORIGINAL RATT for as long as I can remember. Huge influence to me in every single way. So proud to count him as a Diemonds fan. Pinch me!!! – Priya“

At Pearcy‘s last tour stop in Toronto, Ontario, Canada at The Rockpile on April 29, 2016, he invited Panda to join him on stage to sing the Ratt classic “Back For More” (see video below).

Sleaze Roxx commented as follows in its concert review: “Another surprise was seeing Panda join Pearcy on stage for the ending portion of “Back For More.” I am not sure whether that was planned or not but during the song, Pearcy reached out to Panda who was in the general standing audience area and all of a sudden, there was Panda making her way through the crowd to the side of the stage before getting up on stage to sing the chorus portion of “Back For More” a number of times alongside Pearcy. Panda‘s huge smile spoke volumes of what this meant to her and she even exclaimed to the crowd how cool it was to be on stage with Pearcy! As Panda was making her way off the stage, Pearcy commented on what a good singer that she was.”

Stephen Pearcy playing “Back For More” (with Priya Panda) in Toronto, Ontario, Canada on April 29, 2016: