Stephen Pearcy states rumours false that he and Juan Croucier tried to hire or have hired Jake E. Lee

Ratt frontman Stephen Pearcy has taken to Facebook (see below) to refute the rumour that he and bassist Juan Croucier have tried to hire or hired guitarist Jake E. Lee (Ozzy Osbourne, Badlands, Red Dragon Cartel) to join the band.

Pearcy or whomever is controlling his Facebook page posted a comment under the Sleaze Roxx article heading “Bobby Blotzer states Stephen Pearcy and Juan Croucier trying to hire or hiring Jake E. Lee” that was posted back on March 29, 2018.

These rumours started surfacing because according to Metal Sludge on March 21, 2018, Ratt guitarist Warren DeMartini was out of the band. 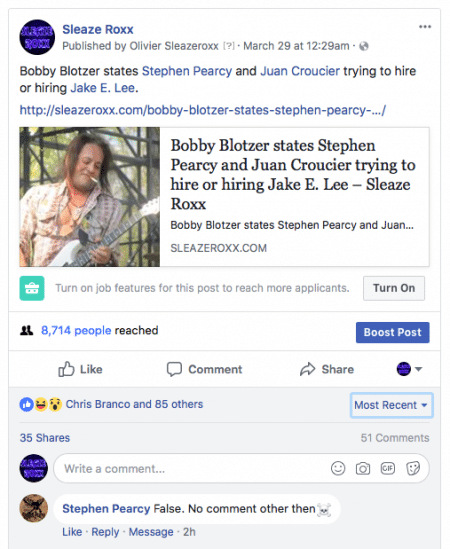