Ratt frontman Stephen Pearcy was recently interviewed by Eddie Trunk on the Trunk Nation radio show on SiriusXM, where he spoke about guitarist Warren DeMartini no longer being in the band. The new “breed” of Ratt recently played their first show at the Kansas Star Casino in Mulvane, Kansas, USA on July 7, 2018 and consisted of Pearcy, bassist Juan Croucier, guitarists Jordan Ziff and Chris Sanders, and drummer Pete Holmes. 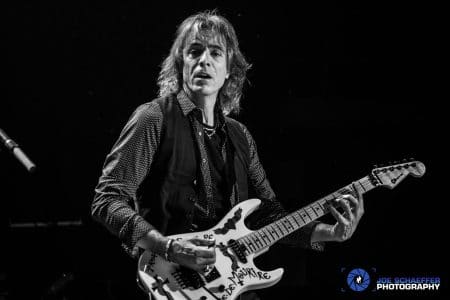 Pearcy stated (as transcribed by Blabbermouth with slight edits):

“Warren just didn’t wanna go out there… And when you have a corporation or a company, that company doesn’t cease if the majority wants to move forward.”

“I’m just moving forward — Juan and myself — and just trying to keep some legacy involved.”

“I can’t speak for the guy [Warren DeMartini]… The guy didn’t wanna go out there. I wouldn’t even call it work. We’re privileged enough, 35 years later, to be able to go out and do what we do. And there’s still a lot of great fans out there who’d love to hear the music. That’s all that concerns me. So if somebody else doesn’t wanna do it in the band, regardless [of whether it’s Warren] or somebody else, [they can] take a hike.”

“Warren was not fired — he wasn’t fired at all. He just took it upon himself to not be involved, but I’m not gonna dwell on that subject anymore either; it’s not worth it.”

“Hey, all I know is we didn’t fire the guy. I don’t tend to dwell on things, so it doesn’t bother me. I just move forward, and that’s what we did. We wanna go out and have a good time and celebrate. It’s no big deal.”

“Warren is no longer in the group — his choice; not ours… The company is one thing, the corporation is another, but being in a band, that’s a whole another world.”

You can read some of the rest of the transcribed interview with Pearcy at Blabbermouth.