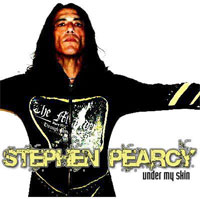 STEPHEN PEARCY TO RELEASE ‘UNDER MY SKIN’ ON JULY 22ND:

Ratt singer Stephen Pearcy’s 3rd solo release “UNDER MY SKIN” will be released in the U.S on July 22 on Airline Records. The album is currently available for purchase in mp3 format at the Top Fuel Records mp3 Store.

Pearcy would like to thank all the hard core fans for coming out to the “UMS” shows, a good time was had by all! Stephen and his Rat Bastards – Frank Wilsey on Lead Guitars (Sea Hags/Arcade), Erik Ferentinos on Lead Guitars (The Antidivsion/Voodoo), Troy Johnson on Bass Guitar and Todd Roberson on Drums (JRZ System) – will commence the “Get Under My Skin” Tour July-Sept 2008!

“Under My Skin” brings Stephen Pearcy back to his early Ratt roots with the energy of a Top Fuel Dragster turning 330 miles an hour!

Under My Skin tracklisting:
You’re Alot Like Me
Watcha Doin’
Big Nothin’
Time Slips Away
In Outta Love
Under My Skin
Bottoms Up
Here We Go Again
Are You Ready?
Injector