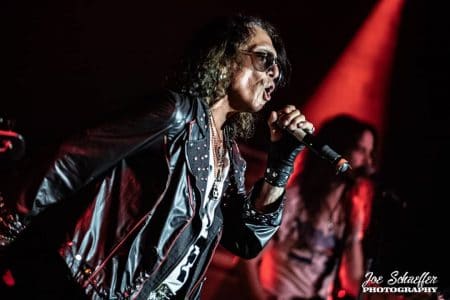 Pearcy was asked when the next Ratt album will be coming out and what musical direction that the record will take to which he replied (with slight edits):

“I always release solo records pretty much every year just because I like to write and try different things. With Ratt, we’re gonna probably release a couple [of] singles first and see what happens. If it fires up, [we] will go into a record. That’s the easy part. It’s been quite a while since the last album was released — 2010-11. Of course, the musical style is going be in the Ratt norm. When we get into the Ratt music writing mode, we know what is Ratt‘s music and what isn’t. I would like to get a little more melodically aggressive on the next album, say something like in between the EP, Out of The Cellar and Invasion of Your Privacy. We are shooting for some more harder Ratt ‘n Roll. Also, I have been  mentioning to Juan Croucier we should do a similar vocal trade off part like we did on “Lack of Communication” off of Out of The Cellar on a new song.”

In terms of what he learned from previously working with renowned producer Beau Hill, Pearcy indicated: “Wow! Quite a lot — arrangements, being patient…  I learned a lot from him. He was a worker. When he went in there to work, it was time to work. It was great to bounce of ideas off of him and then after Out of The Cellar, we knew exactly what we were doing.”