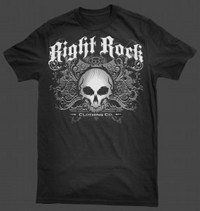 Stephen Pearcy’s Top Fuel Records and Rightrock Clothing are offering Sleaze Roxx readers a discount. Top Fuel Records and Rightrock Skull crew tees are available at http://www.rightrockclothingco.com/store/product.php?id_product=50, with a special $5.00 discount just for Sleaze Roxx readers. When you go through the checkout process just enter ROXX in the voucher code box to get the $5.00 discount.

Stephen Pearcy is gearing up for the release of Ratt’s new studio album. The band is proud to announce April 20, 2010 as the release date for their Loud & Proud debut, Infestation, an 11-song opus that is their first studio record in 11 years. The first single, “Best of Me”, is scheduled to impact rock radio on February 21. The song is available at all digital stores.

There’s been a flurry of activity in the Ratt camp in the past few years. Vocalist Stephen Pearcy has returned to the fold and the band has since signed to Loud & Proud/Roadrunner. The legendary Los Angeles rock squad, also featuring guitarist Warren DeMartini, drummer Bobby Blotzer, bassist Robbie Crane and new guitarist Carlos Cavazo, engineered Hollywood’s much-heralded Sunset Strip sound in the 1980s.

“We wanted this to be like something that we would have written right after [1984’s] Out of the Cellar, Pearcy said. “We definitely went back to basics with the mindset of a band with a lot of excitement and some great songs to get out.” Infestation was produced by Elvis Baskette (Chevelle, Alter Bridge.) in the helmer’s Virginia studio, marking the first time the band has recorded outside of Los Angeles. The album is full of attitude and of reflection, cycling through a range of emotions. There are party anthems that Ratt are known for alongside more contemplative, thoughtful tunes.

The track listing for the album is as follows:
“Eat Me Up Alive”
“Best of Me”
“A Little Too Much”
“Look Out Below”
“Last Call”
“Lost Weekend”
“As Good as it Gets”
“Garden of Eden”
“Take a Big Bite”
“Take Me Home”
“Don’t Let Go”