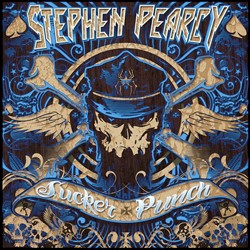 Ratt vocalist Stephen Pearcy has released a brand new single entitled “Too Much Is Never Enough”. The song, from the singer’s upcoming album ‘Sucker Punch’, is available for prucahse at this iTunes location.

Says Pearcy, “(There is) a lot to do still to finish up ‘Sucker Punch’, but worth the wait. Recording a few more newer songs, then solos, mix, master, then ready for you to blast on 10. The two new songs up on itunes are works in progress. Give me your input, thats why I put them up for ya. Enjoy the new songs, we’ll keep you posted on other Top Fuel newz!”

As the founder, lead singer and songwriter of the popular rock band Ratt, Stephen Pearcy led his band to critical praise and multi-platinum success. Formed in Los Angeles in 1982 from the remains of his band Mickey Ratt, Ratt was known for their flamboyant appearance and rebellious attitude. Atlantic Records recognized Ratt’s potential and signed the band to a contract resulting in the 1984 album ‘Out of the Cellar’, which became a top ten multi-platinum success. The disc generated top ten singles followed by sold out arena tours, Ratt played over a thousand shows around the world!

During the bands fifteen year span with Pearcy, Ratt released 10 platinum and gold albums, ‘Out of the Cellar’ their debut topping over 4 million in the US alone. Playing over a thousand shows worldwide and selling over 20 million records worldwide, the band Ratt continues to perform to this day. Stephen began to explore other avenues in 1992 when he created Arcade with Cinderella drummer Fred Coury, releasing 2 records on Epic/Sony Records. Also ‘Vicious Delite’ in 1995, ‘Nitronic’ in 2000, ‘Social Intercourse’ 2002, and his second solo release, ‘Fueler’, in 2006 and ‘Vertex’ with guitar wizard Al Petrilli.

Pearcy has since released 2 Arcade records, ‘A/3’ and ‘Angry’, Mickey Ratt, and a new record to be released, ‘In The Band’, which gives the listener a chance to sing lead vocals to your favorite hit’s! A sample song re-recording of Ratt’s “Round & Round” is up on itunes. With a full length record out soon!

Pearcy’s own Top Fuel Records has recently released compilations by Ratt, new recordings of re-recorded hit’s both unplugged and electrified! With 20 CD’s to his credit, Stephen Pearcy continues to record and tour vigorously with Ratt and solo to the delight of fans.

After a nearly a decade apart, Stephen reunited in 2007 with Ratt for a summer US tour. In addition to these dates, Ratt also traveled abroad to Japan, Sweden and Australia and Spain. Throughout this touring, Pearcy continued to write material for his third solo effort, ‘Under My Skin’. Unlike his first two solo releases, ‘Social Intercourse’ and ‘Fueler’, ‘Under My Skin’ shows comparisons to his classic recordings with Ratt with rockers like “You’re A Lot Like Me” and “Here We Go Again”, and the moving tribute to the late Robin Crosby titled “Time Slips Away”.

Always the restless and constantly evolving musician and businessman, Pearcy has added President and CEO of Top Fuel World to his impressive resume. Pearcy founded Top Fuel Records in 1995.Stephen is currently in the studio working on his 4th studio album ‘Sucker Punch’ and prepairing for his Metal in America Summer Tour 2011, that will introduce new members to his Rat Pack.

With the band Ratt on hiatus 2011, Pearcy will tour extensively and continue to work on his business ventures and solo career. Pearcy will perform shows before the Metal In America Summer Tour kicks off in September 2011.