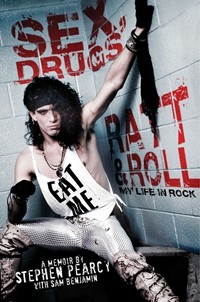 Ratt frontman Stephen Pearcy’s autobiography, ‘Sex, Drugs, Ratt & Roll: My Life In Rock’, will be published by Simon & Schuster on May 7th. The book will chronicle Pearcy’s life from childhood to the formation of Ratt in the 1970s and the band’s rise to prominence in the Sunset Strip hair metal scene of the ’80s.

Says the publisher, “Thanks to their taste for heroin, handguns, and hamming it up, Ratt has a story packed with the drugs, depravity and mind-blowing fashion you’d expect from a top-selling band of the era. Ratt was notorious for their concert contract rider, which required backstage posters of naked chicks, cases of champagne, and a dozen condoms… or no show.

In ‘Sex, Drugs, Ratt & Roll’, Stephen shares how he was primed for a life of excess from a young age — his father died of a heroin overdose when he was 12, and by the age of 15, Stephen was himself a drug addict, a pill-popper and primary acid supplier to the city of San Diego. He also reveals:

How Ratt formed in the ’70s, their early gigs among rock and roll giants on the Sunset Strip, and what Pearcy was willing to do in order to make it big (involving a certain booking agent).
Over-the-top, surreal stories starring celeb friends Eddie Van Halen, David Lee Roth, Ozzy Osbourne, Tommy Lee, and Drew Barrymore.
Explicit details of his relationships with hundreds of groupies and the complete debauchery of the pre-AIDS Sunset strip.
Pearcy’s friendship with Ratt’s thrill-seeking guitarist Robbin Crosby, who became his partner in crime in all of Ratt’s wild adventures.
Blunt sincerity about twenty-something years’ worth of alcohol and drug abuse, culminating in a crippling heroin addiction and rehab.

‘Sex, Drugs, Ratt & Roll’ contains all the tales of Pearcy’s seemingly ludicrous rock star excess — namely, the trashed hotel rooms, the hordes of groupies, and the flagrant drug abuse. In this tell-all, Stephen Pearcy finally lets music fans see behind the scenes into the lifestyle that was governed by rock stars of a certain era, and gives them a glimpse of just what you can get away with when you’re a hair metal star.