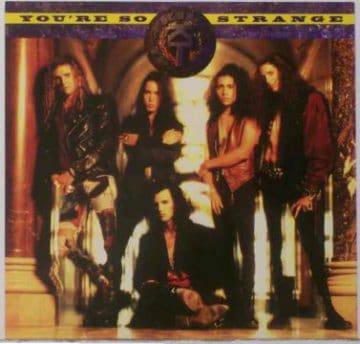 that band were going through some serious life changes. We were a young band with money, resentment, egos, drugs, divorce, marriage…. You name it! The band just imploded during recording our third album. We just took it for granted. Nobody stepped in like management or the label to say you guys gotta get this done. It should have been me. We all just checked out.”

On whether he would ever reunite the band, Shareaux indicated: “We are last standing band that hasn’t reunited! Hopefully that’s creating more demand and value. I’m not opposed. I’m sure four out of five of the members would do it. It would be fun. It would be interesting to get in a room and play that stuff again.”

Wikipedia provides the following history for Kik Tracee (with slight edits): “The band was formed in a Los Angeles suburb in 1988 by guitarists Gregory “Hex” Offers and Michael Marquis, bassist Rob Grad, and drummer Scott Donnell. The four had played the Los Angeles club scene from the age of 16. Singer Stephen Shareaux hailed from Minneapolis, Minnesota, and joined the group that would become Kik Tracee. Drummer Johnny Douglas replaced Donnell during recording of the first album, citing creative differences with producer Dana Strum.

Kik Tracee released the Chris Goss-produced EP Field Trip in 1992. A video was shot for the track “In Trance.”

Kik Tracee, along with producer Garth Richardson, began work on their second full-length release titled Center of A Tension, but the band broke up during the recording process, and the unfinished album was shelved.”