With singer Brian C. Jones leaving Lillian Axe to pursue a solo career and write a book, the band featuring founder and guitarist Steve Blaze was forced to find a new lead vocalist. Jones was in Lillian Axe from 2011 until earlier this year. Blaze went on Facebook earlier today to announce that Supercharger and former Sledgehammer lead vocalist Brent Graham is Lillian Axe‘s new singer. 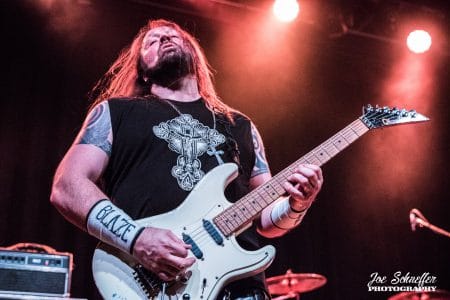 Blaze stated (as transcribed by Sleaze Roxx): “I had a lot of people contact me and do you guys remember a while back when we did a show called Constantine? We were on episode 10 and Constantine was on NBC. Well, [on] the weekend, we shot in Atlanta for two days and if you saw the episode, we were on stage playing “Babylon” and the club catches on fire and ironically, 47 people in the script for that show died in the fire including us. And this was right after I had my rotator cuff surgery so it looks like I’m playing but they had to velcro my arm to my body so I could jump off the stage with real fire going on, and we had to do that 20 or  30 times. But that weekend, Brian was unable to do the show so we asked a gentleman to come in and be the vocalist for Lillian Axe for that episode and our new singer for the band is going to be a gentleman that you’ve probably seen singing for Supercharger for years.

His name is Brent Graham. Brent Graham was the first singer in Sledgehammer. He is amazing. He is not only an amazing singer but he’s the right guy for this, and Brian and Brent had conversations back and forth yesterday. Brent has great respect for Brian and what he’s getting into and the shoes he’s filling, and Brian is like, ‘That’s the guy that I wanted you guys to have in the first place.’ So, it’s working out great. You guys know Brent from Supercharger. Brent is just one of the nicest guys you’ll ever meet. He’s 6’4. He’s a big giant dude and he commands the stage and he’s over the top excited about walking in. And the great thing about Brent is — Brent comes and he says, ‘You know what? I want to be a part of this legacy. I want to meet the fans. I want to make Brian Jones proud of me and they had great conversations. As a matter of fact, Brent is like, ‘Brian, I am going to be calling you man.’ It will be a little nerve wracking for Brent at first. He’s going to be a perfect fit though and the great part of it is that Brian will be kind of mentoring him you know. Brent‘s been around a very long time. He’s very well seasoned and this is going to be a good thing for all of us. So, very happy you know. This is going to be a new chapter in the same book.”

In terms of reuniting with classic line-up singer Ron Taylor who sang on arguably some of Lillian Axe‘s best known studio albums consisting of Lillian Axe (1988), Love + War (1989), Poetic Justice (1992), Psychoschizophrenia (1993) and Fields of Yesterday (1999), Blaze indicated: “Guys, let me squash something real quick. And listen, don’t take this wrong because I appreciate this very much but Ron Taylor is not coming back to Lillian Axe. Not now. I don’t foresee it ever happening and it has nothing to do other than the fact that we’ve moved. He’s moved on. We’ve moved on. Now, I really appreciate the fact that you guys love Ron and I know why. Let me tell you something — Ron and Derrick [LeFevre] and Brian — these guys are all in the same category, the same league. They are all amazing star quality talent but people go on in different directions OK?

And the early Lillian Axe, that’s the stuff that we all grew up on, right? That’s the stuff that we get nostalgic [about]. Look, I am the biggest nostalgia, sentimental freak you can imagine here so I know it. So the music is sentimental to you too but I want you to realize that. There’s a lot of people involved in that music and I like to think because I wrote the bulk of it, that you are still liking what I am writing now and what I will write for albums to come, right? So, that being said, that’s not changing. So the cast members change a little bit here and there. But [guitarist] Sam‘s [Poitevent] been in the band now 20 years right? Michael “Maxx” [Darby] is the original bass player, you know what I mean? These are the roots man. And now we have somebody that’s been around for a long time and you know, we got a great new singer. This is a new chapter. This is not rehashing old stuff. Ron’s doing great with his project in Dallas and that’s what he wants to do and I wish him all the luck. But guys — ‘Get Ron back for a reunion.’ There’s no reunion. We’re not finished. We haven’t even started yet in my eyes. Those guys are doing their thing. I appreciate it but let me tell you something. Poetic Justice, Love + War, Psycho, first album — great records. We all love them. They are still there guys. You can listen to them every single day. But get excited about new stuff.”