The rift between two factions of Trixter continues as the band will apparently be celebrating the 30th year anniversary of its debut self-titled album (released back in May 1990) without two of its members.

In a recent interview with Izzy Presley for Another FN Podcast, guitarist Steve Brown explained how he and bassist P.J. Farley were forging ahead with or without singer Pete Loran and drummer Mark Gus Scott. 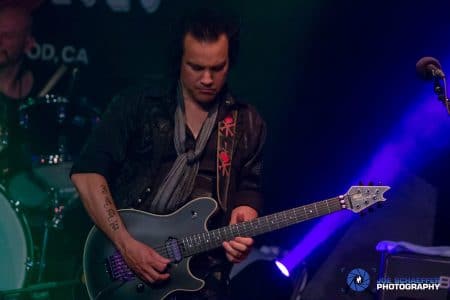 Brown indicated (as transcribed by Blabbermouth with slight edits):

“Myself and [bassist] P.J. Farley, yeah, we’re still out there doing it with [Mr. Big singer] Eric Martin,” Steve said. “Pete [Loran, vocals] and Gus [Mark Scott, drums], I haven’t really spoken to them much, and you have to ask them what they’re doing. But P.J. and I, we do this thing with Eric Martin called ‘Eric Martin And Trixter’, and we go out and we do a Mr. Big greatest-hits set, and I sing the Trixter songs. And we’ve been doing that for the better part of the last three years. We’ve been to Japan, and we plan to take it all over the world. That’s kind of where we’re at.”

He continued: “We’ve had offers [for Trixter shows], and every time an offer comes in for Trixter, it’s given to the other guys, and sometimes they choose not to show up. But if the offer’s good enough for me… That’s one of the good things about being a guitar player who can sing as good as the lead singer and play guitar. You don’t wanna come? You don’t wanna do the gigs? I’m gonna go out and do the gigs and sing my songs. And that’s the way it is. If people wanna hear Trixter, it’s just the way it is. And if someone doesn’t wanna come, I can’t make anybody get on the plane to fly out to a gig. So, that’s pretty much the answer on that.”

Steve added: “Yeah, there’s always a Trixter. We’re looking forward to 2020. It’s the 30th anniversary of the first record. I’m sure we’re gonna do shows. Who’s gonna be there, I can’t tell you. As it is right now, the Trixter that we’ve been playing with is me, P.J. Farley and [drummer] Joey Cassata from the great ZO2 band, who plays with us with Eric Martin. And that’s pretty much all I can tell you on that.”

You can read the rest of the article at Blabbermouth‘s website.

In an interview with Chuck Shute for the Chuck Shute Podcast back in November 2019, Scott was asked whether there was any chance of Trixter‘s classic line-up getting back together for shows to which he replied: “I’m going to be honest with you. There are no plans for, for the original line-up to get back [together].” Scott added: “Unfortunately not now, but that’s not to say. We’ll see what happens.”