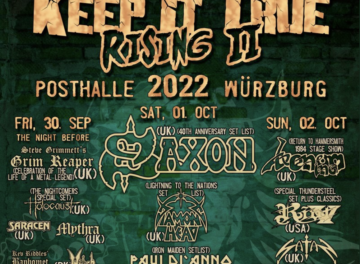 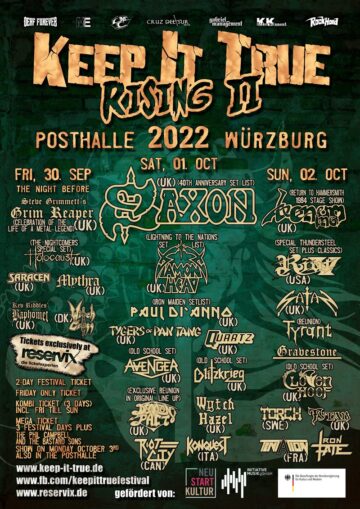 “SG Grim Reaper should have been headlining this show on the Friday night (30th Sept). Saxon are headlining on the Saturday night. The organisers have decided to keep SGGRs slot open in memory of Steve with the band still playing but having guest singers singing Reaper songs – one of them being Steve’s son Rus. I’m very honoured to have been invited along so if you’re going please come & say hi.

The Keep it True Festival made the following announcement (in part) a little earlier yesterday:

After the sad passing of Steve Grimmett, we took some time to think about how we want to deal with the situation. We also wanted to give Steve‘s family some space for now. After a few days we got in touch first with the band and then with the family and everyone said that Steve would be happiest if we did a tribute show for him at KIT RISING 2 and that would keep his music alive. That’s why we’re going to call the show “A Celebration of the Life of a Metal Legend.” We want to do everything as sensitively as possible and have thought about a few things. The band will consist of the current Steve Grimmett’s Grim Reaper Band and we will have guests who were friends with Steve or saw him as an inspiration for their own work. First and foremost, Steve‘s son Russ will be singing some songs, and original Grim Reaper guitarist and band founder Nick Bowcott will be flying in from the US especially for the show. We were also able to win Harry Conklin from Jag Panzer for the show. We’re still working on more guest musicians, but that’s the basis.

Furthermore, we want to let the legend of Steve live on and have decided to give away 2000 old school buttons with Steve on it at the entrance to all visitors free of charge. A part of Steve will live on in the scene on many battlevests and jackets then.

There will also be a Steve memorabilia shirt at the festival merch, with all proceeds going to Steve‘s family.

We hope this is all in your interest.”