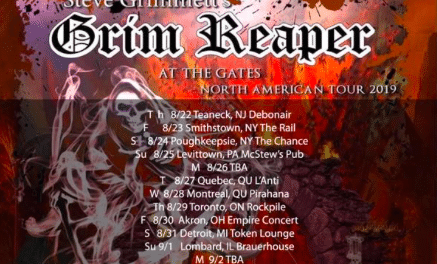 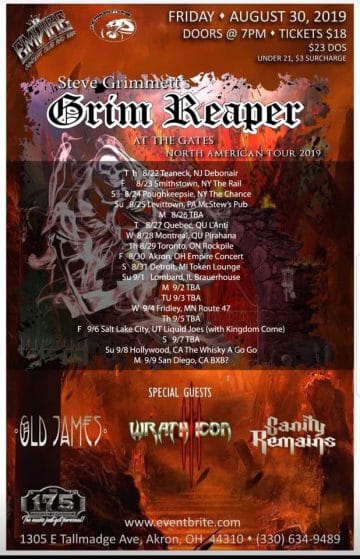 Wikipedia indicates the following in part about Grimmett (with slight edits):

“Steve Grimmett (born on 19 August 1959) is a heavy metal vocalist who began his career in the era of new wave of British heavy metal. His original band was the short-lived Medusa, before he became known as the lead vocalist for Grim Reaper. Grimmett later featured in Onslaught for a brief period, before forming Lionsheart and in more recent times, The Steve Grimmett Band and GrimmStine.

Grim Reaper achieved major success worldwide with three highly acclaimed studio albums along with single releases and MTV airplay. After Grim Reaper came a brief spell with Onslaught, with a debut single that charted in the UK. The Steve Grimmett Band is a more recent project, with Grimmett backed by Ian Nash, Chaz Grimaldi and Pete Newdeck. This band has continued to gig as Steve Grimmett’s Grim Reaper with a lineup now featuring Mark Rumble on drums.

Grimmett had just come back from America promoting his international band GrimmStine which includes Grimmett on vocals, Steve Stine on guitar, Hat on bass and Dave Johnson on drums. Their self-titled debut album was released in 2008.

Grimmett recorded a music video in conjunction with a commercial for Garmin that aired during the 2007 Super Bowl XLI.

In January 2017, Grimmett was hospitalized in Ecuador due to an aggressive infection on his right leg below the knee, where it was amputated in the process. He remained stationed in the medical facility until being released in February. In April, he began to walk again with a prosthetic metal leg attached. On 14 July, Grimmett performed on stage for the first time since his operation in a wheelchair at Bang Your Head!!!.”