Great news for Iron Maiden fans and heavy metal fans in general as the group’s founder and bassist Steve Harris has declared that he thinks the iconic band has at least one more album in the tank.

The following is an excerpt of a recent article/interview done by UK’s The Sun with Harris: 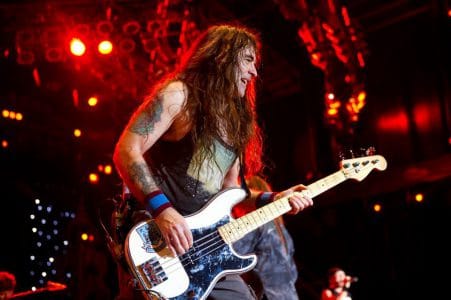 He told The Sun Online: “Everyone is taking care of themselves a lot more than we used to so who knows.

“Even Nicko has been off the booze for 18 months to stay in top shape – he is the oldest.

“As long as he is on form, and drumming for Maiden is a very physically demanding, we will go on. I am sure we have at least another album in us.”

You can read the rest of the article/interview at UK’s The Sun.

According to Wikipedia, Iron Maiden formed 42 years ago in 1975. Harris is 61 years old while drummer Nicko McBrain is 64; guitarists Dave Murray, Adrian Smith and Janick Gers are each 60; and, singer Bruce Dickinson is 58.

Sleaze Roxx stated the following in its review of Iron Maiden‘s last studio album The Book Of Souls: “What then, does this veteran band offer with its sixteenth studio release? Simply put, a 92 minute extravaganza that constitutes their best album, alongside with the universally loved Brave New World, from Dickinson’s second era with the band.”