Lynch was asked about how his signature two-handed guitar tapping technique originated to which he replied (with slight edits):

“Well, it came about in the early to mid-70s. There was this guy in Seattle named Steve Buffington who would do it. I asked him, “What are you doing when you do that?” He told me, “You just find different notes on the scale and you hit it with your right hand.” So, I just started playing around with it, and I saw this guy Harvey Mandel, who used to be with John Mayell and 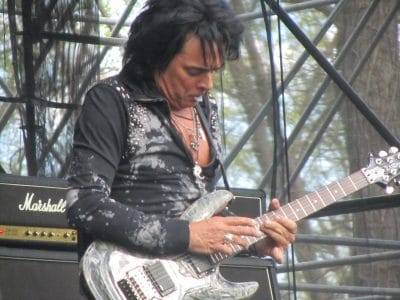 The Bluesbreakers and he had several solo albums out. I saw him perform live once and he was doing that. He was using a couple of fingers, and I just went, “Okay, I’m going to incorporate my first, second, and third finger.” But it was when I went to the Guitar Institute of Technology – classes there started in March of ’78 – and just a few months after the classes started, there was a guy Emmett Chapman that did a clinic there who invented the “Chapman Stick.” The stick is the instrument that is held more vertically, so you have five strings that you play on the bass strings with your left hand, and then five strings that you play with your right hand that are the trouble strings, the higher register.

I just watched him do this amazing stuff with this instrument. He mentioned during the clinic that he came up with this technique because he got so far with guitar, but he wanted to play the instrument more like a piano, where he could play the lower register notes with his left hand and the higher register notes with his right hand. After the clinic, I went up and asked him about it, and he said, “Well, can I see your guitar for a second?” I said, “Yes, of course,” and handed over my guitar. He did a couple of things with the pentatonic scale and a couple of chord things, and a light bulb just went off above my head. I went, “That’s it. That is so cool.”

What I did was I took all the curriculum that I was learning at the school, and I wrote everything out two-handed. I wrote it out on graph paper, which means I’m looking at a guitar neck, not in notation. I figured out a way to try it so that the notes that I was playing in my right hand had a circle around the numbers on the guitar neck, and the left hand had squares around it. And then, if I’m playing a hammer or a pull-off, I put a triangle around it. So I thought, “This would be a good way so that I know exactly what I’m doing.” I wrote down the whole school curriculum this way; songs and everything.

When I played at the graduation ceremony in March of 1979, Tommy Tedesco and Howard Roberts – Howard Roberts wrote the curriculum for the school – they watched me and were just blown away. The whole school was blown away because I didn’t show anybody what I was doing; I was just very private about it because I wanted to make sure that I was really good before I performed in front of anybody. I got up at the graduation ceremony and played three different songs, and it was all using both hands on the fingerboard. The audience went nuts.

Howard and Tommy came up to me and said, “You should write a book about that.” I said, “I already have enough material for three books.” They said, “Really? Well, gather it together. We want to take you to our publisher.” Just a few days later, we went to their publisher, and within ten minutes, I had a book publishing deal. The Right Touch came out in 1979 and became a best-seller.”

In terms of the story that Eddie Van Halen or his camp came up to him and forbid him from using his two-handed guitar tapping technique while Autograph were opening on a tour with Van Halen, Lynch clarified:

“Well, what happened was, it wasn’t Eddie that came up to me; it was [Van Halen’s] tour management. They came up right before we went on and said, “Are you Steve Lynch?”and I said, “Yes.” They said, “Are you the guy who wrote the book on that two-handed technique?” I said, “Yes.” They said, “Well, you’re not allowed to do that on this tour. That’s Eddie’s thing.” I said, “I wrote a book about it before I had any idea who this guy was. And it’s completely different from his style, anyway.” They said, “It doesn’t matter. You’re not doing it on this tour; otherwise you’ll be fired.” So, I was not happy, to say the least.

I later found out – I talked to Eddie – and I said, “Why don’t you call the dogs off?” Eddie knew who I was because when you do that technique around people in L.A., they’d say, “Have you seen that guy Steve Lynch, who does this crazy stuff with all four fingers on both hands?” I didn’t know if he told them, but from the way he explained it when I talked to him, he said, “I don’t know anything about that; you can do whatever you want. That’s not for me to say.” So, I started doing it.”

You can read the rest of the interview with Steve Lynch at Vinyl Writer Music‘s website.