There seems little doubt that Autograph are best known for their hit single “Turn Up The Radio” from their debut album Sign In Please, which was released back in 1984. 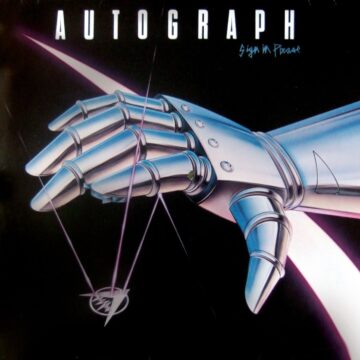 In terms of what inspired the song, Lynch indicated (with slight edits): “We were at rehearsal at Victory Studios in North Hollywood, and I started playing this riff, and I was just jamming on stage by myself. Then Randy [Rand] got up, I showed him the riff, and we started playing together. Then Keni [Richards] got up and started playing a drumbeat to it. Everybody got up on stage and we made this into a song within a half hour, then we all sat down and thought, “Let’s all write some lyrics for this real quick. It’s got a really cool groove.” We sat down and wrote the lyrics together. Within a half hour, we had all the lyrics, the only difference being, is that it was called “Turn Up the Cassette Machine.” Later, of course, we replaced that with radio, because we didn’t think cassettes were going to be around forever.

RCA didn’t think it was a strong enough song to have our first single centered to me. We actually went into the studio and recorded it without them knowing it, and then when they listened to it back, they went, “Yeah, let’s have this be the first single.” Sometimes these record executives don’t know as much as they portray themselves to. The musicians, they’re the ones that are in the game. They’ve been in the game their whole lives.”

With respect to his iconic guitar solo for “Turn Up The Radio”, Lynch noted: “It took me five eight-hour days, because I knew that this song was going to be a hit. So, I worked and worked and worked for my solo. I kept on coming up with ideas, and then I would throw them away. I was getting very frustrated because I wanted to find the perfect solo. I actually spent about 40 hours on that solo before I finally came up with something that I was really satisfied with. That was the product that’s out there today.

It’s difficult trying to come up with something unique, but I always wrote my solos for that particular song. I’m not one of those guitar players who just goes and jams over the area where I’m supposed to be doing a solo. In fact, I can tell when other guitar players do that. To me, they’re kind of meandering; they’re playing licks that they already know. I look at the song like; we spent time writing the song; why shouldn’t I spend time writing a solo for it? And that’s how I’ve always looked at solos. I’ve always worked on my solos, sometimes for weeks at a time, before I come up with something that I really like. I did that with all of my solos; I always spent a lot of time working on my solos, more so than any other part of the songs. I tried to be unique and do something that really fit the song itself.”

When it was pointed out how the solo is incredibly nuanced and technical, Lynch pointed out: “We go into a different key; we go to the key of A-Major, Mixolydian when we go into it, so that gives you the inclination that something different is going to happen. So, as soon as I go into that chord, I come in sliding up – I’m going up the A Mixolydian scale, I’m going from the fourth to the major third, and then to the root to the minor seventh, and just climbing up the scale like that. Then, I climb up to the top, and then I do this descending thing where it’s in third and sixth intervals – all being major – and I descend down to that. Then, I start doing the hammer-on part, and I’m doing the triads for each different chord that’s going by and I follow the chords. And that leads up to the crescendo of the solo.”

You can read the rest of the interview with Steve Lynch at Vinyl Writer Music‘s website.

Autograph‘s “Turn Up The Radio” video (from album Sign In Please):