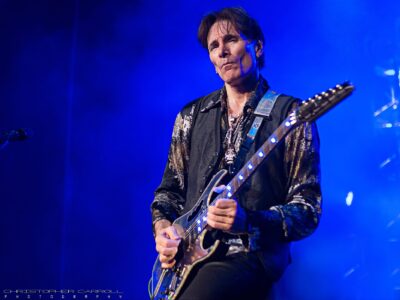 In terms of how he reconciles his rock side with his fusion side, Vai indicated: “I can enjoy going to a pancake house and having pancakes, and then at night, I can enjoy going to a fancy restaurant. [Laughs]. My dining pleasures are based on my appetite, and it’s the same thing with my guitar playing. When I was a young teen in the 70s, I was lit up big time by the rock music of that period, like Led Zeppelin, Queen, Deep Purple, and all those great players. I loved rock music, I absolutely loved it. I was in rock bands, and we played KISS, Aerosmith, Alice Cooper, all of these rock bands, and I loved the feeling of it. At the same time, long before I even picked up the guitar, I was inspired by compositional music when I was around six years old, and even then, I wanted to be a composer. I knew I wanted to do that, even at that age. I understood what the little dots meant, the little black dots, and I understood that if you can arrange them in a particular way, people will follow what you write and that this was an explosive creative field, and I wanted to own it. So, all through my early years, I listened to all kinds of classical music, and I’d doodle notes, and then, when I was maybe ten or eleven, I started to compose. And when I was twelve, I entered a high school music theory class for twelfth graders, and for six years, every day, I was heavily trained in compositional music.

At the same time, on the other side of the tracks, we’re stealing lights from people’s lawns to use in our light show at our gigs. We were doing high school dances and blowing up smoke bombs, and stuff on stage, it was just the best. [Laughs]. When I heard Frank [Zappa’s] music when I was young, it had such an impact on me, because he was doing it all, he was merging all of those things, and I thought, “Wow, I can do anything I want, really.” So, I entered the realm of the 80s rock bands and played with all 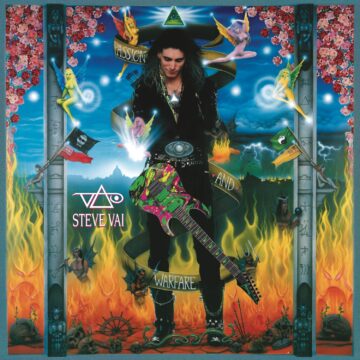 those bands you mentioned, and I really enjoyed it. I felt like I wore that badge proudly, and authentically because that music was in my blood. It was the wonderful pancakes at the pancake house, you know what I’m saying? But throughout all of it, I knew that at some point, this unique kind of quirky music that I had in my head had to come out, and when I was twenty-five, I started working on Passion and Warfare, and it’s just never ended.”

On whether he ever felt restricted during his time in Alcatrazz, David Lee Roth and Whitesnake, Vai stated (with slight edits): “On one level, absolutely not. You know, on one level, I was pushing myself, joyfully, to the absolute end of my ability, because the platform was there, I had to deliver. I wasn’t going to try to deliver like Yngwie [Malmsteen] in Alcatrazz or Eddie [Van Halen] with David Lee Roth, or John Sykes with Whitesnake – I couldn’t. But I knew that I could deliver something, and I threw myself into it, and it was great. But I knew, as I was going through it, I was living a particular fantasy of being a Rock Star, and I knew it was fleeting, and I was totally okay with that. I didn’t want to chase that for the rest of my life. I knew that the timing was right, and I had the opportunity to travel the world, to play to sold-out arenas, be treated like a king, make a gob of money, and make great music with great guys. I also knew that it was going to come to an end because I had to, at some point, start doing this other type of music, and when I started to do it, and I recorded Passion and Warfare, I actually thought my career was over. Surprise, surprise. [Laughs].”

You can read the rest of the interview with Steve Vai at Vinyl Writer Music‘s website.