Kix frontman Steve Whiteman was recently interviewed by Sleaze Roxx‘s long-time contributor Ruben Mosqueda for KNAC and the singer spoke about the band’s upcoming album Fuse 30 Reblown, which is being released to celebrate the 30th year anniversary of the group’s best selling album Blow My Fuse. 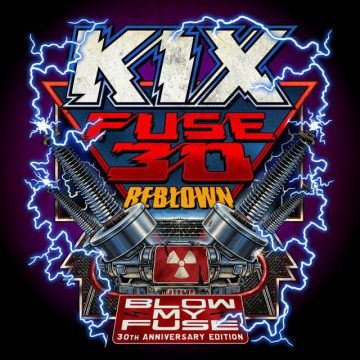 In terms of Fuse 30 Reblown, Whiteman stated in part: “… It’s set for release on September 21st. It was our current bass player Mark Schenker, who suggested we do something to commemorate the anniversary of ‘Blow My Fuse.’ The record label started asking us of we were interested getting started on a new record. It was Mark that brought up the idea that we remaster the record, put it out there and do a campaign for it. We thought that was an excellent idea, we put our heads together alone with our label Loud & Proud and we got to work. We’ve been playing the record in its entirety over the course of the past couple of months to honor the biggest record of our career.”

Whiteman added: “… We were involved with this and we even got Beau Hill involved to get this remixed and remastered. Beau did a lot of things better than you heard on the original—it just sounds so much better because of the technology that’s available in the present day. That’s the genius of Beau Hill. We knew Beau because he did the Midnight Dynamite record, then [bassist] Mark Schenker approached him about remixing the record and we loved the idea because Beau Hill was our choice to do that record which ultimately it was Tom Werman that was used.”

With respect to any thought of bringing back producer Tom Werman in any capacity, Whiteman advised: “No, there was such a huge falling out between Tom and our former bassist Donnie Purnell that it wasn’t a consideration. The rift between those two affected everyone. This has all come together in the last year, we loved how this came together quickly and easily, why ruin a good thing like that?”

You can read the rest of the interview with Whiteman at KNAC.