While there is no question that seemingly the entire rock world was buzzing at the anticipation of having Guns N’ Roses play at the Troubadour on April 1, 2016, one very unlucky individual has to be the group’s former drummer Steven Adler that was reportedly supposed to join his former bandmates Axl Rose, Slash and Duff McKagan on stage that night but was not able to given that he injured his back during a rehearsal beforehand. 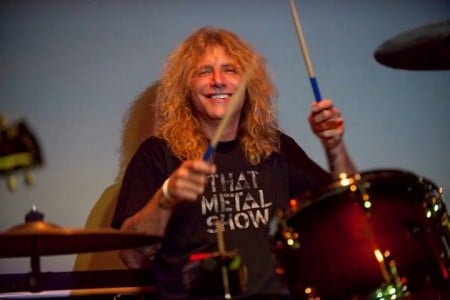 Rock journalist and author Mick Wall stated the following in his online blog a few days ago:

“No, I wasn’t there. And neither were you, let’s not kid ourselves. But in spirit it, most definitely. We were all there.

Funny how all these years later things are much as they left it in 1993. Axl, Slash, Duff, in that order, with a couple of good guys filling in where Izzy and Steven once were. Dizzy was still there too. Along with a new face in Melissa Reese, the girl-genius Bryan Mantia probably introduced Axl to.

The reaction, though, the electric buzz, the impossible vibe, that insensible yet tangible net of intrigue surrounding their every move before, during and after the show, that was all there like the last 23 years never happened. I love that. You don’t know how much it’s been missing from rock until suddenly there it is again.

I know some who were there. And they tell me it’s all true, it’s all for real. That Steven actually was going to be there too but he hurt his back during rehearsals. They also told me some other things which I feel a douche for keeping to myself, but I’ve never been into spoilers. Why ruin the fun? This is the year when the fun is finally back to taunt us.”

Although it is sad to hear that Adler injured himself during rehearsals and rumour has it that he needs surgery to his back asa result of it but the good news is of course that Adler may well take part in the Guns N’ Roses reunion at a later date since he was already so close to being there in the first place.