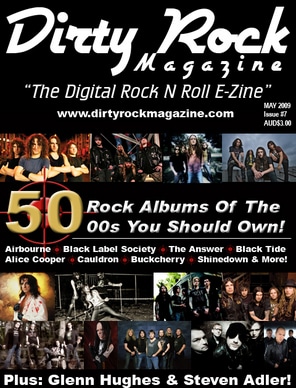 Here are a few excerpts from the Steven Adler interview:

I just read that Matt Sorum suggested that if a reunion were to happen they should have you and him playing drums. What do you think about that?

He said they should have him and me?

Yeah if there ever was a GNR reunion they should have both of you.

Well what I heard, I heard yesterday the same thing but what I heard was that he said the only drummer for Guns N Roses is me. And I was very happy to hear that because he’s right. I’ve recently become friends with him and I think somebody heard it wrong because I heard the opposite. If it is what you said I’m calling him up and saying “Excuse me”? (laughing).

Well what I read saw was only a small snippet on Blabbermouth and not the whole story.

(laughs) Yeah I heard the opposite. And the way I see it that’s how it should be. And the thing about Guns N Roses is for starters, Axl ran the whole thing into the ground and still is, it’s a shame. Two, he should have named his record W.A.R. W. Axl Rose, then I think it would have been a bigger hit. You know what, it’s heartbreaking because I was there from the beginning and helped get it started and to see what he did and still doing, it’s hurtful. That and I heard that some big rock agency offered us $150 million for us to do 20 shows. And that was very hurtful that Axl said no and doesn’t want to do it. Because that doesn’t happen.

So is a GNR reunion as far away as ever?

The way Axl is, what I know of him, is he could make a call tomorrow and say ‘ok guys we’re doing it’. I’m not saying he’s going to call up and say “I’m sorry guys, and we’re gonna do it” (laughs). And he is that way so you never know. Tomorrow he could call up and say ‘lets do this guys’. As long as the five of us are alive there’s an opportunity. But I can’t wait, I can’t wait and I’m not going to wait.

I’m enjoying my life again, I saw Duff, I was hanging out with Duff. They have this rock n roll camp at the studio I rehearse at and I went along and hung out with him and Rudy Sarzo, Kip Winger, Carmine Appice, Alan White… And they had a huge drum circle with four kits set up and I got up there playing with all these huge stars. It was really, really great.