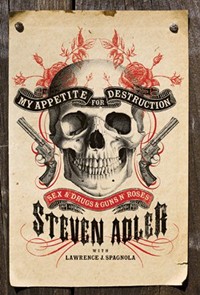 From Steven Adler, the original drummer for Guns N’ Roses, comes My Appetite for Destruction, the inside story of GNR. Due on July 27th through HarperCollins, My Appetite for Destruction offers a different perspective from the bestselling Slash, Adler chronicles his life with the band, and own intense struggle with addiction, as seen on Dr. Drew’s Celebrity Rehab and Sober House.

After forty years, twenty-eight ODs, three botched suicides, two heart attacks, a couple of jail stints, and a debilitating stroke, Steven Adler, the most self-destructive rock star ever, is ready to share the shattering untold truth in My Appetite for Destruction.

When Adler was eleven years old he told his two closest friends he was going to be a rock star in the world’s greatest band. Along with four uniquely talented–but very complicated and demanding–musicians, Adler helped form Guns N’ Roses. They rose from the streets–primal rockers who obliterated glam rock and its big hair to resurrect rock’s truer blues roots.

They were relentless rock stars, onstage and off, taking “sex, drugs, and rock ‘n’ roll” to obscene levels of reckless abandon. By the late 1980s, GNR was the biggest rock band in the world, demanding headlines, awards, and sold-out shows, with one of the greatest rock albums of all time: Appetite for Destruction. But there was a price to pay. For Adler, it was his health and his sanity, culminating in a brutal banishment by his once-beloved musical brothers. Adler digs deep, revealing the last secrets, not only his own but GNR’s as well: Slash’s betrayal, Axl’s unpredictable temper, and Duff’s revenge. He bares it all with this shocking fuck-the-fates expose that charts his meteoric rise and devastating collapse.

Adler was humiliated and disgraced when Axl Rose kicked him out of GNR in front of an MTV audience of millions. Adler plunged into the dark side, spending most of the next twenty years in a drug-fueled hell. But he finally beat his epic addiction to crack and heroin under the care of Dr. Drew Pinsky.

With Adler’s newfound clarity comes a fierce determination to tell it all. Revelatory, heartbreaking, hilarious, and ultimately inspirational, you will never read anything more jaw-droppingly honest than My Appetite for Destruction.

Courtesy of www.sleazeroxx.com and www.harpercollins.com