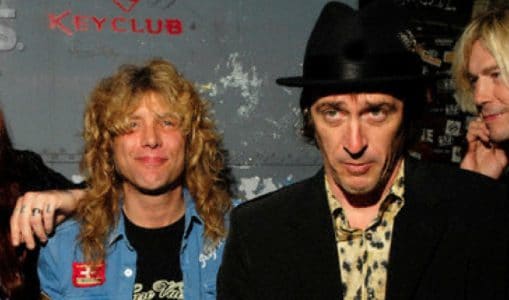 98.9 The Rock! noted how great it was to have Adler make a handful of appearances at Guns N’ Roses shows since singer Axl Rose, guitarist Slash and bassist Duff McKagan reunited together back in April 2016.

Adler stated (as transcribed by Sleaze Roxx): “Thanks buddy. It was very exciting. Of course, I wish the guys would have wanted to have done, you know, the real reunion with me and Izzy [Stradlin], but just being able to play with them was very exciting and it was just so great. You get love from 100 people, it’s a wonderful feeling. You get love from 85,000 people, it’s a high. There’s no drug better. It was so great to be able to look down and see Slash and Duff and Axl, you know. Like, I’m a fan, and all the fans wanted to see the original five of us, but it didn’t work out that way. I’m sorry, fans. I did my best. I swear on God I did. I swear I did my best. I have no say. That’s right. Everybody, get on the web site and put some prayers into God. Let’s make this happen this new year.”

You can listen to the interview with Adler at 98.9 The Rock!‘s website.

Adler rejoined Guns N’ Roses on a handful of shows for a few songs including “Out Ta Get Me” and “My Michelle” in Cincinnati, Ohio, USA on July 6, 2016 and for “Out Ta Get Me” in Buenos Aires, Argentina on November 4, 2016.

Guitarist Izzy Stradlin reportedly was rehearsing with Guns N’ Roses at one point and apparently turned down a five figure fee per cameo prior to the much publicized Guns N’ Roses reunion kicked off in April 2016.