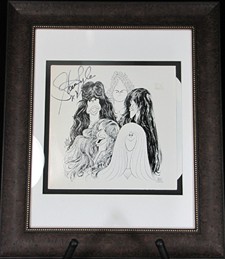 Aerosmith frontman and American Idol judge Steven Tyler is auctioning off an autographed ‘Draw The Line’ vintage vinyl and a signed Aerosmith Guitar Hero guitar to support the MusiCares Foundation.

Steven Tyler Signed & Framed Vintage Aerosmith Vinyl: Be your own “Demon of Screamin” with this Draw the Line vintage vinyl signed by Steven Tyler. Draw the Line is the fifth album by Aerosmith and was recorded in an abandoned convent near New York City, rented out for that purpose. At the time of the album’s release the band was considered big enough that their name didn’t need to appear on the front of the album artwork. The animated portrait of the band was drawn by renowned celebrity caricaturist Al Hirschfeld.

Steven Tyler signed this vinyl at the 7th Annual MusiCares MAP Fund Benefit Concert Honoring Dave Gahan and Kevin Lyman on May 6, 2011 at Club Nokia in Los Angeles. Steven presented the Stevie Ray Vaughan award to Dave Gahan and spoke about his own struggles with addiction. The vinyl is framed in a dark chocolate rustic wood frame with white matting. Steven signed on the upper left side above his cartoon image. The back of the frame can be opened to remove the vinyl just in case you want to try and hit some of Steven’s high notes!

Guitar Hero: Aerosmith Signed by Steven Tyler for PS3: Get ready to experience Aerosmith’s GRAMMY winning career, from their first gig to becoming rock royalty, in Guitar Hero: Aerosmith! You can rock out to Aerosmith’s greatest hits, as well as songs from celebrated artists that the band has either performed with or has been inspired by in some way. Take on the roles of Aerosmith members and “perform” in the same venues as they once did.

You may be better at becoming one of “The Bad Boys of Boston” with this guitar controller signed by Aerosmith’s very own legendary frontman turned American Idol judge, Steven Tyler! Steven signed the faceplate of this guitar while backstage at the 2011 MusiCares MAP Fun Benefit Concert where he presented the Stevie Ray Vaughan Award to Dave Gahan of Depeche Mode. Steven Tyler is one of the biggest personalities of our time. Bid now and rock out Steven style!