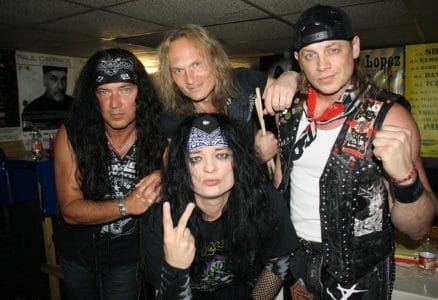 Speaking exclusively with Sleaze Roxx, Rachelle and Michael answered a number of questions.

In terms of why it has taken so long for Shameless to play live again and release their seventh studio album, Michael stated: “We did the last tour with Shameless in April and May 2014. Afterwards, I was really busy with Cherie Currie doing tours with her in the UK, Australia and New Zealand and we also released a live record from the tour in the UK. Once I came back from the last tour, I started right away on new material for Shameless.”

Shameless are unique in that the band is essentially based in Germany but have had many well known American rockstars playing on their albums including Rachelle (Tuff), Steve Summers (Pretty Boy Floyd), Eric Singer and Bruce Kulick (KISS), and Tracii Guns and Phil Lewis (LA Guns).

With respect to how the idea for the band came about and how songs are chosen for a specific singer, Michael stated: “It was actually the idea of Eric Singer from KISS who helped me a lot putting the band together and he also played drums on some of our albums. When I write songs for Shameless, I pretty much know right away who will be the right voice for the track. Stevie Rachelle and Steve Summers did most of the tracks on the Shameless albums but we also had various special guests like John Corabi, Phil Lewis from LA Guns who also sang on the new album, Cherie Currie and this time Frankie Muriel from King Of The Hill. We did two songs with Frankie. One was a ballad that I wrote called “It Can’t Be That Bad” and a cover of the Billy Ocean classic “Get Out Of My Dreams, Get Into My Car.” Tracii Guns shared all the guitars with BC on the new record and Tommy Wagner who joined Shameless in early 2014 played all the drums on the new tracks.”

Rachelle added, “I am excited to have been involved since the first record and I have done numerous tours, all of which have been awesome!”

In terms of what fans can expect from Shameless for the setlist for the upcoming four European shows, Rachelle stated: “We always play some Tuff songs. We use to do half and half, and that is usually are plan — six to seven Tuff songs and six to seven 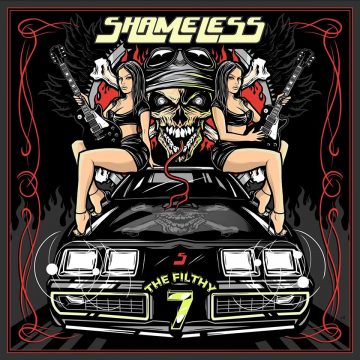 Shameless songs. Fans always expect to, or want to hear some Tuff songs. In the early days of Shameless tours, we only had the first, or the first and second release to pull from. And there are some great songs there, but fans who see me performing usually want to hear a few Tuff tunes. So that was easy to add. Now that Shameless is on our seventh record, it’s getting harder. We have faves, and a few that are a must for all shows. Oddly, I did not sing ‘Queen 4 A Day’ which was the title track of the second release. Steve Summers sang that song in studio. But, the song is so popular with Shameless fans, that we play it in every show. I have no issue singing Summers‘ song in the show as the fans love. Other than ‘Queen For A Day,’ I only sing the songs I performed on the records.

Michael added: “We always try to mix the set with Shameless and Tuff songs. We have so many songs that sometimes it is hard to pick what we will play but we wanna give the fans the best of both worlds and also play new tracks from the current album. Especially when we release a new album, we wanna play those songs for the fans so they have a better chance to check out the new material but also will hear all the classics like ‘Nonstop City,’ ‘All New Generation,’ ‘Queen 4 A Day,’ ‘American Hairband’ and of course ‘I Hate Kissing You Goodbye.'”

On whether the four scheduled European shows will be it for Shameless this year, Michael stated: “We have four shows in April but will add more shows in November and December through Germany, Italy, Switzerland, Belgium and other markets.”

TUFF/SHAMELESS The All New Generation (live in Belgium)