Tuff singer and Metal Sludge principal Stevie Rachelle has decided to share his story via a series of articles on Metal Sludge called the Tuff Diaries and is now on his third instalment where he auditions for Tuff for the very first time.

Wikipedia mentions four singers in Tuff‘s history but Rachelle has identified one more lead vocalist (Dastin Luss) that was in the band for apparently a very short period of time after Jim Gillette left and before Rachelle officially joined the band.

“Tuff is an American glam metal band formed in 1985 in Phoenix, Arizona, by guitarist Jorge Manos (DeSaint), bassist Todd Chaisson (Chase), and included guitarist David Janssen, drummer Chris Louthan, and vocalist Michael Meyers (Cordet). This incarnation of Tuff was prior to taking on it’s “Glam” image, and the music was significantly “heavier”. This little documented lineup actually played in the local Phoenix market for roughly a year, at such clubs as (Rockers, Bootlegger, etc.) opening for various National Acts, including Flotsam and Jetsam.

After drummer Gary Huckaby left the group in 1986 to work with another local project, the band enlisted drummer Michael Lean and vocalist Terry Fox, who left the band shortly afterwards to pursue an ice skating career. With replacement vocalist Jim Gillette, the band recorded a four-track EP entitled Knock Yourself Out (1986). However, Gillette soon departed to form Nitro and was replaced by Stevie Rachelle.”

Rachelle recalls in part his first audition on July 7, 1987 in the Tuff Diairies #3 as follows (with slight edits):

“… As we drive the 15 minutes through the San Fernando Valley, Lani is a bundle of energy, laughs and inquiries about her new friend from Wisconsin.

Lani thinks I have a funny accent and bursts into laughter when I use the word “couch”… said with a thick (what some people would say is a) Fargo type tone.

As we arrive to the rehearsal that night, I guess I am suppose to just come in and watch with Lani.

You see, it turns out Tuff already have a new singer. 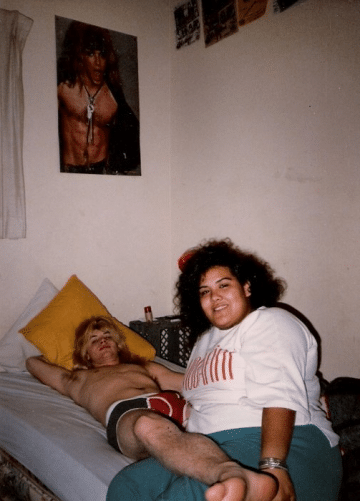 A guy named Dastin Luss, who was from Las Vegas, Nevada.

They had been rehearsing with him, and he was already living with them as well. In their closet at the Tuff Muff Mansion.

Michael had his own room, Todd and Jorge shared a room and Dastin lived in the closet.

No joke, and more on this closet later.

So the word was, he was living there, had rehearsed with them but they were not really digging on him.

I recall the guys saying something like, “We think he’s a fag.”

And then something about him being a witch and he did a seance, or some weird shit with candles and incense.

I guess they were desperately trying to find a new singer. So much so, they took a half-fag, half-witch from Sin City.

But in short time they opted for the guy with a clip-in hair extension and pink bootss from Oshkosh instead.

Anyway… so Lani and I walk in and they are mid-song.

Michael is playing his drum kit that looks like something Rikki Rockett would play.

It was all tricked out and had words like SEX, HOT, BEAVER FEVER and LICK stenciled all over the shells.

Michael was endorsed by a few companies, including Sonor, DW and Paiste, as well as MAYEA.

This was possibly the coolest (glamest) drum set I had ever seen in person.

Todd and Jorge had multiple axes lined-up, all were B.C. Rich. They were endorsed!

Seated on the other side of the room were 2 guys.

I would later learn the big dude was Lani’s older brother David (Poison’s security guy), and the blond was Jim Gillette.

The band were playing songs… just Todd, Jorge and Michael but no singer.

Then at some point this other long blond haired dude walks in and starts reading lyrics and singing along.

He was all glammy looking and seemed very flamboyant.

I could see where they thought he might be a pillow biter.

I immediately thought, “He sucks.”

He only sang like a song or two, seemed uncomfortable and then left the room again.

I don’t know if he was nervous, but I guess it could have been stressful for a new guy – when there were 4, 5 other people watching.”

Eventually, Rachelle states as follows in the Tuff Diaries #3: “So a day or two goes by and Todd tells me “Dastin is gone, we kicked him out.”

I had kind of heard them talk about him, but didn’t know much.”

You can read the rest of Rachelle‘s story at the Tuff Diaries #3 on Metal Sludge.